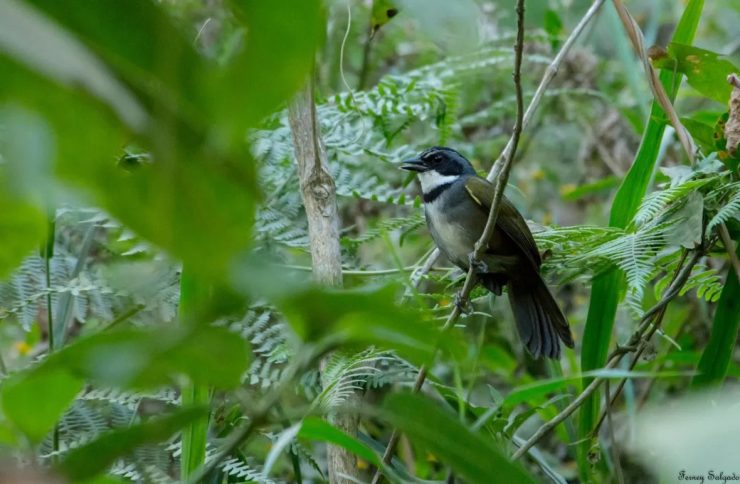 ENDEMIC species from Colombia, until recently considered conspecific with A. torquatus. Like other species of the genus, it is a bird with semi-terrestrial habits that remains solitary or in pairs. Its name Arremon derives from the Greek root arrhemon = silent and its epithet basilicus derives from Latin and means magnificent.

It is19 cm of lenght. Both sexes are similar. It is a fairly long-beaked bird. It has a black hood and face; gray midline on crown and superciliary; black band under the cheeks and headphones, which does not extend to the sides of the neck and contrasts enough with his white throat. Its upper parts including wings and tail are olive green. In its lower parts it has a black band that separates the white of the throat from the rest. The sides of the chest are gray and the flanks up to the cloaca are olive tinged with brown. The iris of its eyes is brownish-brown, its beak and legs are black. Young people are more brown on top.

It can be easily confused with the Perija Brushfinch (Arremon perijanus) and the Olive Finch (Arremon castaneiceps) but differs from these by the song and because the black band that extends between the cheeks and the headphones does not extend to the sides of the neck.

This species is only found in Colombia in the Santa Marta region between 600 and 2800 m above sea level.

It inhabits the understory of humid mountain forests, particularly on forest edges.

Fledglings have been recorded between March and July. No further information is available

Stay alone or in pairs. It forages on the ground where it digs the litter with its beak in search of prey.

Previously considered a subspecies of A. torquatus, but it was separated from it as it was supported by the molecular evidence, the characteristics of the plumage and the song. Conservation status