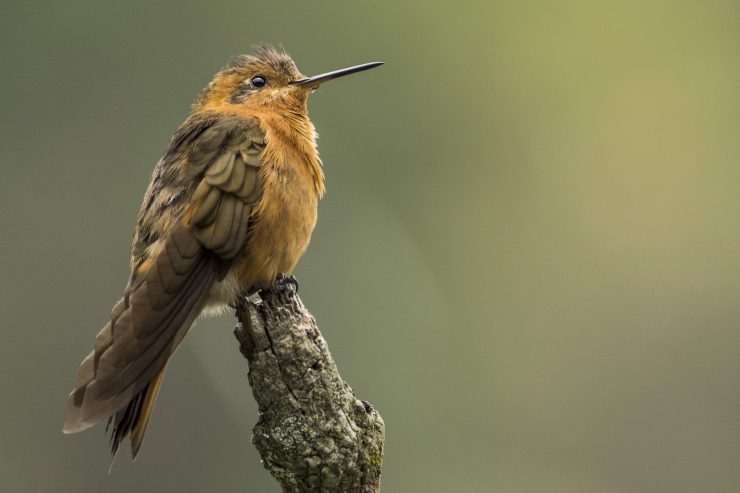 Hummingbird mainly cinnamon color, inhabits highlands and with a proportionally short bill for its body size. Its name Aglaeactis comes from the Greek aglaia = splendor and aktis = ray of sun. The epithet cupripennis comes from the Latin cupreus = copper or copper and pennis = winged.

It measures 12 to 13 cm. The male weighs 7.6 to 8.1 g and the female 6.9 to 7.5 g. Male has short, straight black bill. Its crown and coat are dark brown in color, it has a blackish olive back that gradually changes to iridescent pinkish violet on the lower back and iridescent golden green on the rump. The rest of its body is mainly rufous cinnamon with olive bronze central rectrices. The female is duller with a smaller iridescent patch on the back.

It is the only species of the genus in Colombia and it is easily distinguished from other hummingbirds by its mainly color is cinnamon, and  by the short beak.

Two subspecies are recognized: A. c. cupripennis and A. c. caumatonot. Only the nominal breed is found in Colombia.

It is found in the transition zone from the montane forest to the moorland. It is common in dwarf forests and sometimes in areas with tall weeds and dense bush patches.

This hummingbird feeds on the nectar of the flowers of various plant species, among which some belonging to the genera Puya, Bomarea, Fuchsia and Centropogon have been recorded. To a lesser extent, it also includes arthropods in its diet.

In Colombia, individuals have been recorded building nests in March in the PN Puracé and individuals in reproductive condition in February and August in the Central and Eastern Cordillera. Also nests in July in southern Ecuador. Their nest is cup-shaped and built with moss and cobwebs. Other aspects of their reproductive biology are unknown.

Some populations of this species carry out altitude migrations at certain times of the year and in response to changes in food availability. It is a highly territorial and aggressive species, especially with members of the same species. It is commonly seen hanging from flowers and with V-wings while it sucks and occasionally glides down mountain slopes with wings outstretched.

This species is phylogenetically close to A. castelnaudii and A. aliciae. Aglaectis cupripennis caumatonota and A. castelnaudi castelnaudi hybridize to some degree in the department of Cuzco, Peru. Up to six races have momentarily become accepted within this taxon but plumage and morphometric characters have been found to indicate that it is the result of clinal variation.