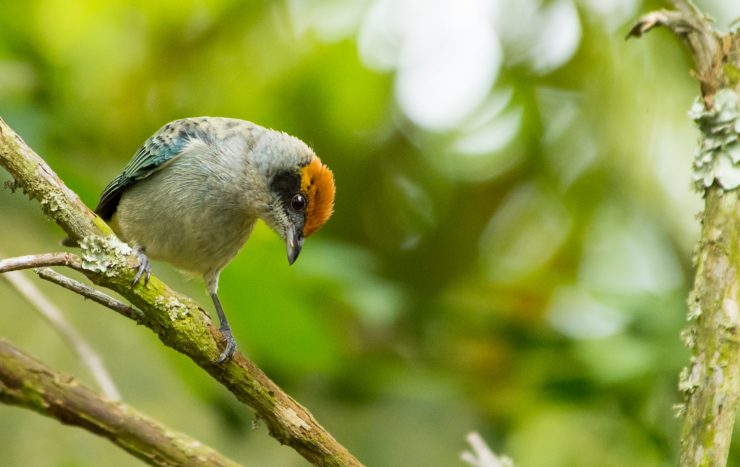 The Scrub Tanager is an almost endemic species for Colombia. It is very common and generally tolerates disturbed areas. The epithet vitriolina derives from the Latin vitreolus = crystal, referring to its bluish green colors.

It measures between 14 and 16 cm and weighs approximately 20 g. It has a ruffled crown and black sides of the head forming a small mask. Its tail and wings are grayish green, the latter with black margins. Its lower parts are lighter and the abdomen is whitish.

This species is found only in Colombia and Ecuador. It is distributed between 500 and 2,200 meters above sea level in the inter-Andean valleys of the Magdalena, Cauca, Dagua and Patía rivers. Also in the North of Santander, Valle del Cauca and further south of the country through Nariño. In general, throughout the Andean region except for the eastern slope of the Eastern mountain range.

It mainly feeds on fruits and insects. He is frequently observed feeding on fruit in artificial feeders.

Apparently at any time of the year. Its nest is in the shape of an open cup, which generally builds in the tops of trees. They lay two pale green eggs with irregular patches of dark hue.

It is a bird that can be seen alone or in pairs in the treetops and also in low bushes. Rarely in mixed flocks.