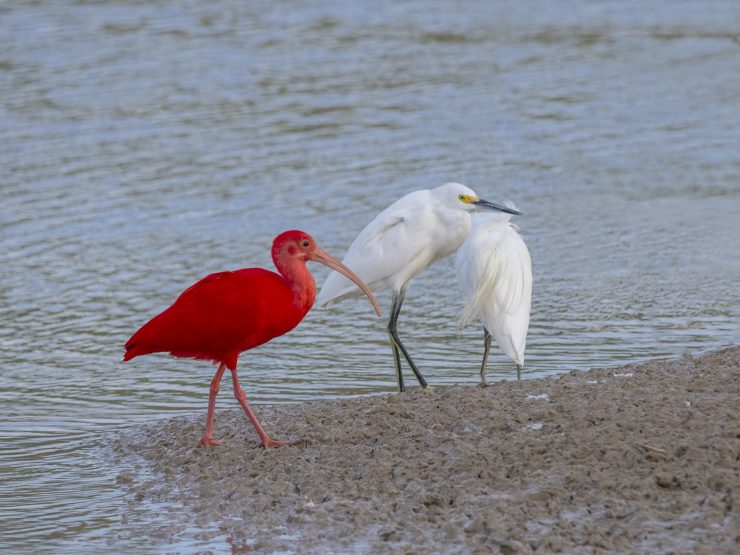 The Scarlet Ibis is a bird species of the Threskiornithidae family and the order Pelecaniformes, the approximate size of these bird is 60 centimeters.

It has a long, curved bill. Its plumage is bright scarlet with the distal third of the black wings. Its legs are pink just like its bill which turns black during the reproductive season. The immature ones have the head and neck striated or mottled with coffee and white and the upper parts of dark grayish brown. Its lower parts and rump are white and sometimes pink mottled.

This species is found in eastern Ecuador, northern and eastern Colombia, northern Venezuela, Guyana and the coast of Brazil to the delta of the Amazon River. In Colombia it is located in the lower valley of the Magdalena River and east of the Andes from the south of Arauca to the Meta, west of Caquetá and probably well east to Vichada. On some occasions it has also been registered in the Sonso Lagoon and in rice fields in the department of Valle del Cauca.

The brilliant red color of the scarlet ibis comes from carotene found in the crustaceans on which it feeds.

The scarlet ibis is a gregarious bird, living, traveling, and breeding in flocks. In flight, ibises form diagonal lines or V-formations.

These birds are rather quiet, only grunting or croaking on breeding grounds.