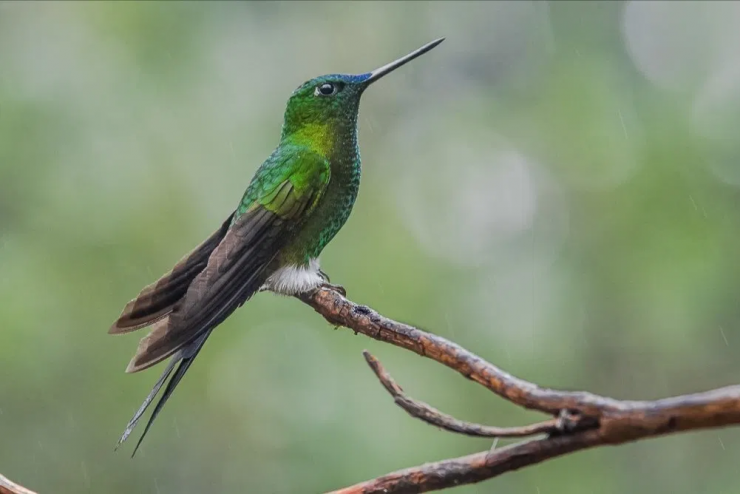 Puffins (Eriocnemis) are small hummingbirds with a straight black bill, bright green plumage, and large «puffs» of feathers on the shin; These tufts of legs are usually white, but are black in one species (Black Thigh Puffleg Eriocnemis derbyi). The Sapphire Vented Puffleg is a large Eriocnemis, and is mostly bright green, with violet or purplish undercoats. The nominated subspecies, in Colombia and Ecuador, also has a blue crown. The tail is blackish blue, relatively long and deeply forked. The Sapphire Vented Puffleg sexes are similar, but females are duller and the belly of females in southern populations is whitish.

The Sapphire Vented Puffleg resides in the Andes. There is only one specimen, reportedly taken in 1898 from Mérida, Venezuela (Schuchmann et al. 2001); this locality is very isolated from the closest locality where this puffin occurs regularly, in southwestern Colombia (Hilty and Brown 1986). The sapphire-vented Puffleg is also found in the Andes of Ecuador, with most localities on the west slope, and ‘on the slopes above the central and inter-Andean valleys; there are relatively few records of the «real east slope» in the Andes in Ecuador (Ridgely and Greenfield 2001a). There is an apparent gap in the distribution of the Sapphire Vented Puffleg between southern Ecuador and northern Peru in Amazonas, south of the Marañón River. This species is widely distributed in Peru from central Amazonas south to Puno (Schulenberg et al. 2010), although it is apparently not found in the well-studied Cordillera Carpish in Huánuco. However, sapphire-vented puffleg has not (yet?) Been reported in Bolivia (Hennessey et al. 2003).