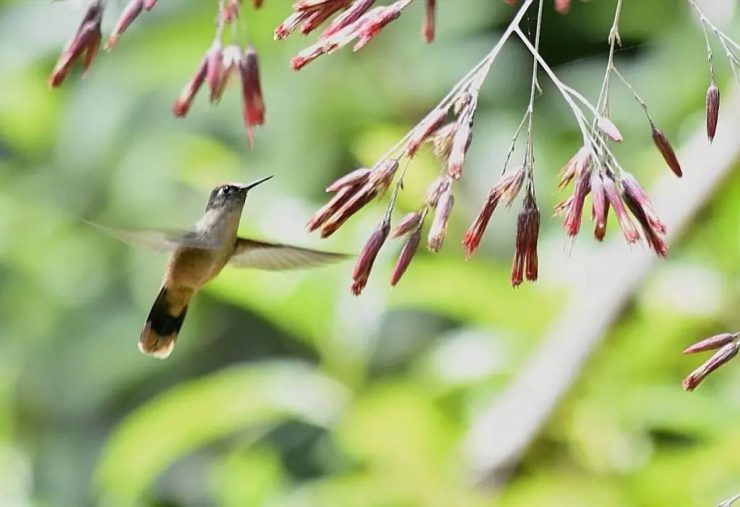 The Santa Marta blossomcrown (Anthocephala floriceps) is a species of hummingbird in the family Trochilidae.

It is an endemic bird of Colombia. Its natural habitat is subtropical or tropical moist montane forest. It is threatened by habitat loss.

Santa Marta Blossomcrown is an attractive hummingbird of the Sierra Nevada de Santa Marta, in northern Colombia; this species formerly was considered to be conspecific with Tolima Blossomcrown (A. berlepschi) of the Andes of south central Colombia. Both species are small hummingbirds with a relatively short, straight bill. Males have green upperparts, with a buffy white forecrown, bright orange hindcrown, and dull gray underparts. Female blossomcrowns are similar to males but are dull brown on the crown. The most striking plumage difference between the species is in the pattern of the rectrices: the tips of the undersurface of the tail feathers are broadly white in Tolima Blossomcrown, but the pale tips are smaller and tawny in the Santa Marta species. Santa Marta Blossomcrown occupies the understory of humid montane forest and older second growth; not common, it is threatened by habitat loss.

Santa Marta Blossomcrown is very similar to Tolima Blossomcrown (Anthocephala berlepschi ), with which it has previously been considered conspecific. It differs by lacking the largely white tail feather tips of A. berlepschi.

Santa Marta Blossomcrown and Tolima Blossomcrown (Anthocephala berlepschi) have long been considered conspecific. Recently, however, Lozano-Jaramillo et al. found that these two taxa are reciprocally monophyletic for mitochondrial and nuclear loci, and that their divergence occurred about 1.4 million years ago. Additionally, ecological niche models suggested that there is a high degree of climatic niche divergence between the two, leading to the elevation of each taxon to species rank.

Very closely related to A. berlepschi, with which it has long been considered conspecific.

This species inhabits humid forest and older second growth, at elevations of 400–1700 m in the Sierra Nevada de Santa Marta.

Presumably sedentary, but the possibility of seasonal, altitudinal movements have not been investigated.

No specific food plants have been recorded, except for flowering banana, but usually forages at low levels in under­storey.

Suprisingly poorly studied. Adults of both sexes apparently forage close to the ground in the understory and males aggregate in leks.

The nest, eggs, and breeding behavior of Santa Marta Blossomcrown remain completely undescribed. The only available information pertains to adults in breeding condition collected in September and October.

There is no available information on topics such as life span and survivorship, causes of mortality, home range, and related demographic topics.

VULNERABLE. CITES II. Restricted-range species: present in Santa Marta Mountains EBA. In conjunction with small range, species may be vulnerable to habitat destruction; not known to accept man-made habitats. In Santa Marta forest is cleared specifically for narcotics. Considered Near Threatened until 2000, when uplisted to Vulnerable because it was known from so few localities and its range and population was thought to be contracting, and this was prior to recognizing Tolima Blossomcrown (A. berlepschi) as a separate species. Currently listed as globally and nationally Vulnerable. Santa Marta Blossomcrown is at least nominally protected by Sierra Nevada de Santa Marta National Park and El Congo reserve (owned by Fundación Pro-Sierra Nevada de Santa Marta).

Song a long series of repeated “tsip” notes, at a rate of c. 1·5 notes/second.