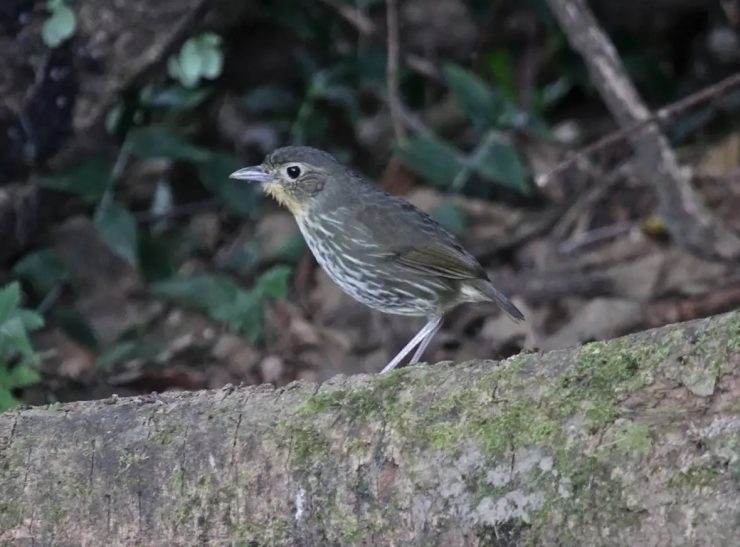 This species is endemic to the Sierra Nevada de Santa Marta in Colombia and is probably closely related to G. kaestneri. Its name Grallaria derives from the modern Latin grallarius = stiltwalker and its epithet Bangsi was established in honor of the American zoologist and collector Outram Bangs.

It is about 18 cm in lenght. The weight of an unsexed bird is known (62 g). Both sexes similar. It has brown irises, leaden gray tarsi and a bill with a black upper jaw and a leaden blue lower jaw. Above it is olive brown with an olive-greyish crown, it has a whitish point in the loreal region, brown ear-coverts and a whitish eye ring. Its throat is bright okra buff with indistinguishable white streaks, the rest of the underparts white with dark streaks, and olive-brown flanks with white streaks.

In its range, the only species of the genus with which it could overlap and be confused is the Scaled Antpitta (Grallaria guatimalensis) which has blackish scaly upper parts, buffy whiskers and dark underparts, not white with dark stripes.

It is found in the north of Colombia. This species is endemic to the Sierra Nevada de Santa Marta where it is distributed from 1200 to 2400 m above sea level.

It inhabits mature humid forests and forests in advanced secondary succession, where it uses the soil and the low understory. Sometimes it also uses forest edges and small clearings.

In the month of September, a female was registered in reproductive condition, also a young one following an adult in the month of July and an immature one was collected in May. Other aspects of their reproductive biology remain undocumented.

It moves mainly on the ground and low branches. When perishing it is less elusive than its congeners so it can be easier to see. It feeds in clearings and edges, mainly in the morning hours.

At the national and international level, it is classified as a species in a Vulnerable state. The main threats it faces are the destruction and fragmentation of its habitat, due to the expansion of the agricultural boundary, indiscriminate logging, burning and the establishment of illicit crops. The expansion of illicit crops, in turn, has resulted in herbicide spraying by the state, with a consequent degradation of the ecosystem. It is estimated that this species has lost about 50% of its habitat

Private natural reserves have been established that have helped to reduce the pressure on this species a bit and it is highlighted that the upper part of the San Pedro district where an individual was observed is protected by the indigenous reservation and the PNN SNSM (C Navarro pers. Comm. 2010). Additionally, the species has been registered in 3 areas declared as AICA, it is also in the PNN SNSM and the conservation actions carried out in the RN La Cumbre stand out, where it is common to find the species.