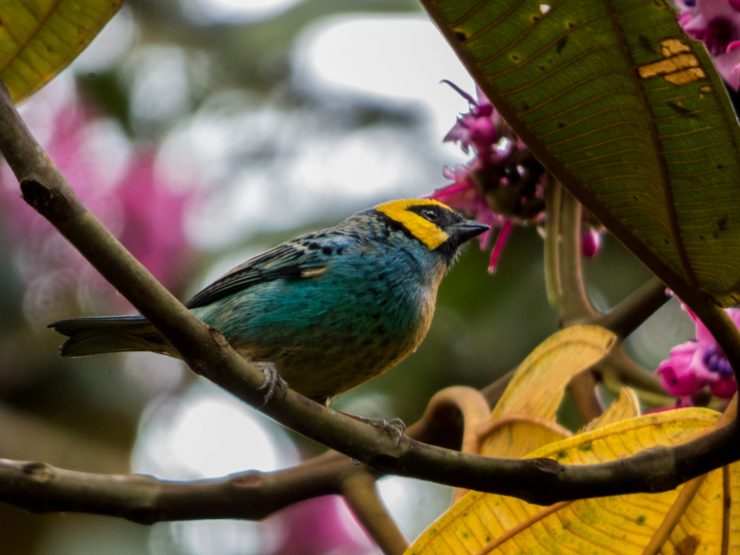 This tanager lives mainly in the Andes. Its name Tangara derives from the Tupi language and means dancer. Its epithet xanthocephala derives from the Greek xanthos = yellow and from the Latin cephala = head, referring to one of its most distinctive characters.

It is between 13 and 14 cm lenght and weighs approximately 17 g. Its head is mainly golden yellow in color with a small black mask that extends down to the throat. It has a black nuchal collar and the rest of the upper parts are almost completely blue or turquoise green with a black striped back and its wings and tail are also black with blue-green margins. Their underparts are tan with blue sides.

It can be confused with the Multicolored Tanager (Chlorochrysa nitidissima) and the Flame-faced Tanager (Tangara parzudakii), in places with low incidence of light because all three species have yellow on the head. They differ in that C. nitidissima does not have a black mask or throat, and T. parzudakii has a red face.

This species is found from northwestern Venezuela to northern Bolivia through the Andes. In Colombia it is distributed between 1300 and 2400 m above sea level in the three mountain ranges, in the Serranía del Perijá and the Serranía de la Macarena.

It inhabits humid mountain forests, where it uses forest edges and forests in secondary succession. It can also be observed in plantations and disturbed forests.

It feeds mainly on fruits, especially berries such as those of some melastomataceae. It also consumes arthropods and frequents man-made fruit feeders.

Young have been recorded between March and July. Both members of the pair participate in the construction of the nest for which they use strips of dry leaves and moss.

It has a typical tanager behavior. Search upside down along bare branches in the middle of the vegetation and canopy. It also frequents trees and bushes in fruit. It is observed solitary, in pairs and sometimes in large groups of the same species or in mixed flocks.