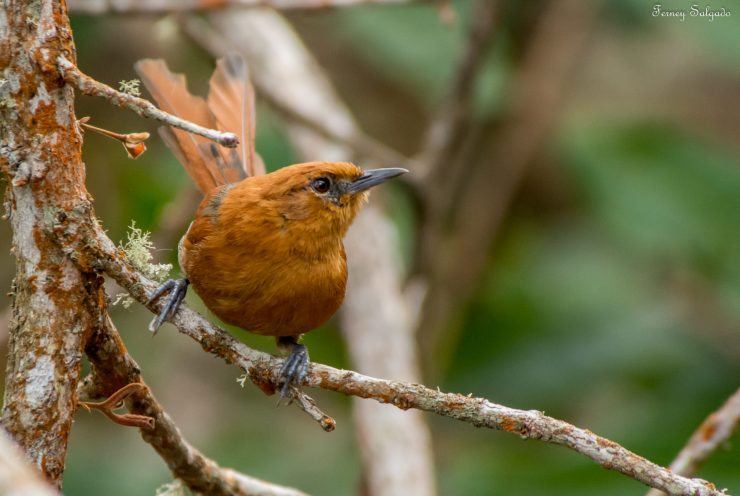 In its range there is no other species with which it can be easily confused.

This species is endemic to Colombia. It is distributed from 1000 to 4600 m high above sea level in the Sierra Nevada de Santa Marta, although it is mainly found from 2000 to 3000 m high.

It lives in humid primary forests where it uses the middle and upper strata. It also uses forest edges, shrubs in open areas, weedy clearings and thickets with vines and brambles where it commonly uses the lower layer of vegetation (0.5 to 7 m high). It has been found to have a certain degree of affinity with the growths of Chusquea sp. in intervened forests above 2000 m above sea level.

Their diet is mainly made up of arthropods, but it is unknown which groups in particular are part of it.

Reproductive individuals have been recorded from January to June and young individuals in June and July. There is no more information about it.

Stay in pairs, family groups, or mixed flocks. Forages in the lower stratum of vegetation (mainly 0.5 to 7 m high) where it forages for prey in foliage and along small branches in dense thickets.

Its taxonomic situation does not register recent revision.

This species is classified as Vulnerable at the international level and as Near Threatened at the national level. Although it is a common species in its range, the area in which it is found is suffering loss of vegetation due to the expansion of the agricultural frontier and the establishment of pastures for cattle. It is estimated that this species has lost about 59% of its habitat and added to this, some important areas for this species are found outside protected areas such as the Cuchilla de San Lorenzo, which is not included in the PNN Sierra Nevada de Santa Marta.