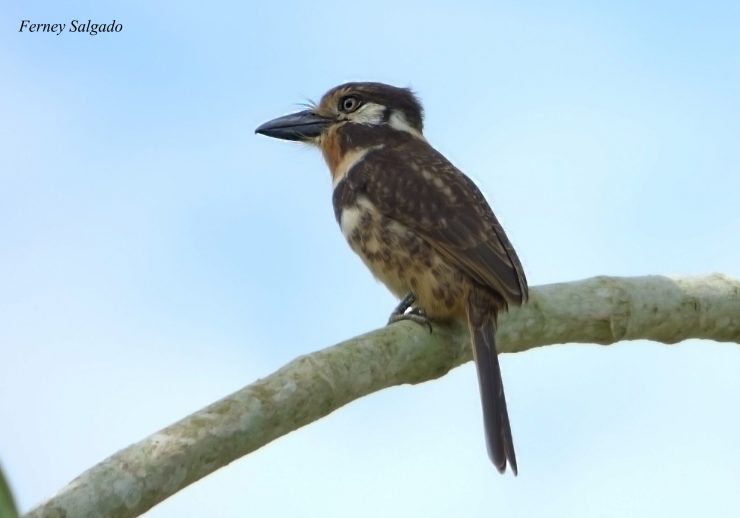 Of the Puffbirds it is one of the most conspicuous and active species. Currently the taxonomic status of its subspecies is under discussion. Its name Hypnelus derives from the Greek hupnelos = sleepy and the epithet ruficollis means reddish neck and derives from the Latin rufus = reddish and collis = neck.

It measures 20-22 cm and weighs 41-57 g. It has a black bill, yellow to white irises, and black or dull green legs. It has a dark brown head with rufescent spots on the nostrils, white and rufous spots in front of the eyes, a whitish patch on the forehead and cheeks, crown stained with pale brown and white or buff nuchal collar. Its upper parts are pale brown with grayish mottling, most notable on the scapulars and tertials. It has wing-coverts with buff margins, it has the rump and the upper tail-coverts with buff scales and a dark brown tail with pale, square and slightly graduated tips. Its chin is white, it has a rufous low throat and high chest, it has one or two black pectoral bands and the rest of the buffed rufous underparts with some black dots or bars on the sides. The immature ones present scaling ante above, on the ear-coverts and on the pectoral band.

Four subspecies H. r. decolor, H. r. ruficollis, H. r. coloratus and H. r. bicinctus. The colorless breed is distinguished because it is paler above, especially on the cheeks, and has a whiter underbust and belly, with less barred flanks. The coloratus race is similar to the nominal subspecies but with blacker cheeks, more orange throat, and buffy orange underparts. The bicinctus subspecies is distinguished mainly because it has two black pectoral bands.

This species is found in northeastern Colombia and northwestern Venezuela. In Colombia it is distributed up to 1200 m above sea level in the arid part of the Caribbean Coast from the Sinú River to the east to the base of the Sierra Nevada de Santa Marta, the Serranía de Perijá and south to the valley lower part of the Cauca river and the middle valley of the Magdalena river in Antioquia (ruficollis). Also in La Guajira (decolor), east of the Andes in Norte de Santander (coloratus) and in north of Meta, Casanare, Arauca and northeastern Vichada (bicinctus).

It inhabits savannas, arid scrub, deciduous forests, scrub with scattered trees and abandoned crops. Sometimes it is also found in trees near bodies of water.

In its stomach contents it was found that 87% corresponded to invertebrates and the remaining 13% to fruits of a single species. Among the prey on which it feeds, beetles and dragonflies have been recorded.

In Colombia there was a female in laying in the month of April in Casanare, males in reproductive condition in October in the city of Cúcuta and nests in Santa Marta in May and August. It nests in cavities inside termite mounds or in abandoned furnace nests (Furnarius) where it lays 3 eggs. Details of hatchling incubation and development time are unknown.

It remains alone, in pairs or loose groups of up to 6 individuals. It remains mainly in the lower stratum of the vegetation perched on exposed branches from where it makes short flights towards leaves, branches or the ground to capture its prey.

It has also come to be classified in the genus Bucco. Some authors consider the bicinctus subspecies as a distinct species based on differences in plumage coloration and report that hybridization with populations of other races in contact areas was infrequent. Currently its taxonomic situation is under discussion and studies are required that describe in detail the patterns of geographic variation for the genus Hypnelus, as well as the possible hybridization processes present in the contact areas of the different populations.