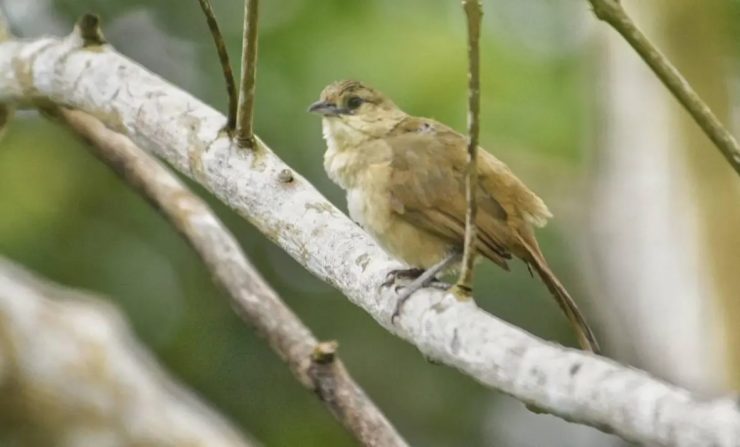 Some authors consider the northern race (inornatus) as a distinct species. Its name Phacellodomus comes from the Greek roots phakellos = bunch of twigs. The epithet rufifrons comes from the Latin roots rufus = red and frons = forehead.

It is around of 16 to 17 cm in lenght and weighs 18 to 31 g. Both sexes are similar. It has brown to greyish irises, gray legs and a bill with a dark gray upper jaw and a gray to bluish-gray lower jaw. It has a dark rufous forehead, dark brown crown with some pale streaks, superciliary before that continues to the supraloreal region, grayish loreal region, dark brown postocular region and the rest of the face light brown before light. It has the region from the back to the tail of brown color with the primary coverts a little darker. Their underparts are buff white with darker sides, brownish flanks, and rufous-tinged undertail-coverts. The young individual lacks a rufous forehead and has mottled upperparts.

The     Crested Spinetail (Cranioleuca subcristata) has rufous wings and tail, striated forehead and crown. It could also be confused with the Plain-crowned Spinetail (Synallaxis gujanensis).

It has a discontinuous distribution and is found in the north, center and west of Venezuela, northeast of Colombia, south of Ecuador, north of Peru, east of Bolivia, south and northeast of Brazil, center-north of Paraguay and northwest of Argentina. In Colombia it is distributed below 500 m above sea level east of the Andes in Arauca, east of Casanare, northeast of Meta and north of Vichada.

Its habitat is open meadows with scattered trees, bushes and gallery forests.

Their diet is mainly made up of arthropods, among which spiders, beetles, crickets, ants and bed bugs have been recorded.

In Colombia, individuals in reproductive condition have been registered in July and August in the department of Meta. Apparently it is a monogamous species. Its nest is a cylindrical structure 0.5 to 2.5 m long and 25 to 100 cm wide, with tunnels inside that connect multiple entrances and with 2 or more chambers 10 to 15 cm in diameter, which are lined with pieces of bark, leaves, hair, feathers and reptile skin. The nest is built with twigs at the end of an isolated tree branch at a height ranging between 2 and 23 m. It lays 2 to 3 eggs in the lower chamber and these are incubated by both members of the pair for 16 to 17 days. Both parents feed the young, which remain in the nest for 21 to 22 days. In the construction of the nest and its defense help individuals from previous litters. In Venezuela it was found that at least 11 species of birds used the nests of this species as resting and nesting places, in occasions nesting at the same time in different chambers.

It is quite a noisy and conspicuous bird. Stay in pairs and in family groups of up to 10 individuals. It forages mainly on the ground and occasionally up to the middle of the vegetation where it captures its prey by gleaning on dead leaves and on the surface of branches.

Some authors consider that the inornatus and castilloi races make up a different species. The race peruvianus is likely to be a distinct species.