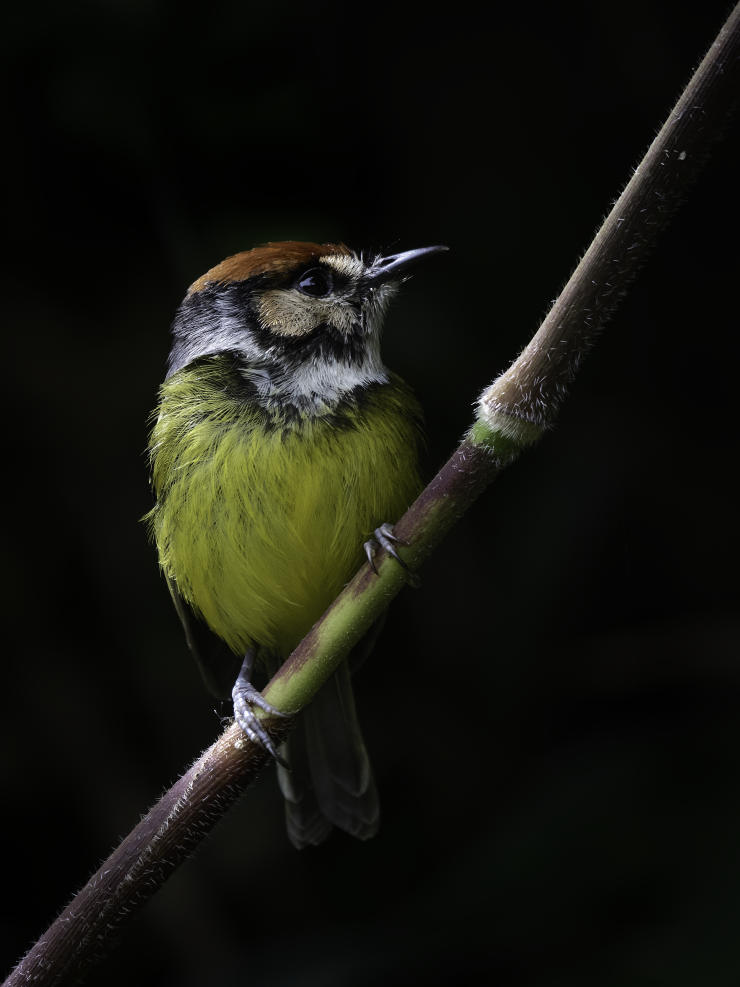 It measures between 9.5 and 11 cm long. The crown and cheeks are red or ruffed, and the nape is black; the throat and the upper part of the back are white or black with white spots, the chest yellow, the back olive. It has wings with black, yellow and olive stripes. It has a black bill and whitish legs.

It has a feathery head and a rather long and broad bill at the base. Its crown is shiny ruff and has a gray nape separated by a black line which connects with another black line in the malar region. Above it is olive green and its wings are blackish with two yellow bars. The margins of the remiges and tertiary feathers are yellowish. Its tail is olive brown and its throat and high chest are white with bright yellow underparts. Both sexes are similar.

Previously it was located in the genus Todirostrum. Forms a superspecies with P. lulae. The subspecies appear to form two groups based on plumage, called the «flanged group» (melanomystax, peruvianus) and the «flat-headed group» (ruficeps, rufigenis). Two specimens from Boyacá could be hybrids (melanomystax x ruficeps), but on the other hand there is no intergradation between the two groups, which combined with notable differences in plumage suggests that the two groups could be different species. More studies are needed to clarify its taxonomy.

Poecilotriccus luluae, from the eastern slopes of the Andes in northern Peru, has been described as a different species, but some experts consider it as another subspecies. For others, P. luluae and P. ruficeps make up a superspecies.

This species is found in the Andes from Venezuela to Peru through Ecuador and Colombia. In Colombia it lives between 1600 and 2700m above sea level (rarely up to 1000m) in the Western and Central Cordillera and south to Cauca and at the head of the Magadalena valley.

It is easily distinguished by its ruffled crown, prominent facial pattern, and «split» underparts. However, it could be confused with the female of the Black-and-white Tody-Flycatcher Poecilotriccus capitalis), although this is only from lowlands. Also, with the Rufous-headed Pygmy Tyrant (Pseudotriccus ruficeps) which has rufous head and throat.

It feeds on insects including Diptera and Hymenoptera. Also from small spiders.

It remains solitary in pairs or in family groups, rarely in mixed flocks. It perches between 1 and 3m in bushes and performs short and quick flights to the underside of the foliage or to a new perch. Generally hidden and difficult to see. Occasionally it is seen exposed on the edge of vegetation.