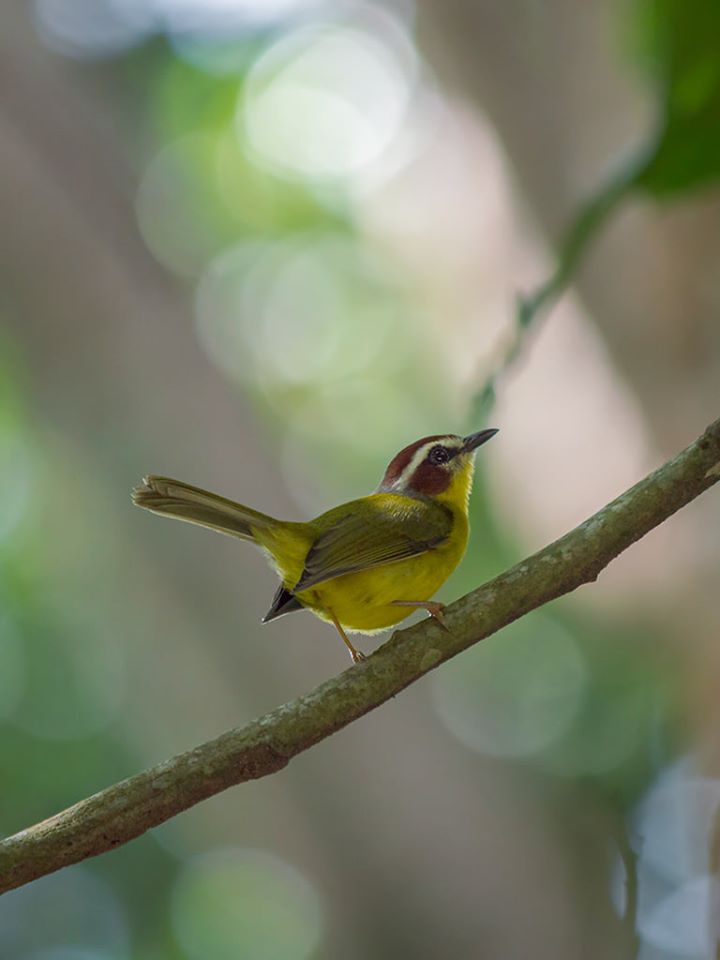 DESCRIPTION. Basileuterus rufifronsare about 12.7cm long (5 inches). They are olive-gray colored birds with white underbodies, and yellow throats and breasts. Their name is derived from their uniquely patterned head and they have rufous on their crown. Males are only slightly different than females and adult colors are very similar to those of young birds. Their posture is defined by a cocked tail at an angle ranging from 45 degrees to completely vertical. Geographically they vary by the amount of yellow on their throat and breast and even vary sometimes in leg and tail length. In South America and Central America Rufous-capped Warblers (Basileuterus rufifrons) are now known as a different species, Chestnut-capped Warbler (Basileuterus delattrii) because the yellow on their breast and throat is much more extensive. The bills are very thick, wings are short and rounded, the tail is long with separate feathers, the legs are also fairly long.

DISTRIBUTION. The Rufous-capped Warbler is usually found in parts of Central and South America such as Mexico, Guatemala and Belize. It is sometimes found as far north into the United States as Arizona and Texas. Although these birds are occasionally spotted in the United States, the majority live further south.

HABITAT. Rufous-capped Warblers prefer tropical venues or brushy habitats. They make their homes in regions with foothills and the lowermost parts of mountains. In the United States they have only been spotted in canyon bottoms surrounded by scrubland.

DIET. Rufous-capped warblers primarily feed on insects and spiders, foraging through dense brush and scanning close to the ground for movement. They are not generally known to flycatch from perches.

REPRODUCTION. The Rufous-capped Warbler lays 3-4 eggs in a dome shaped nest. The nest has a side entrance and consists of plants and fibers placed on the side of steep banks, rocks or logs. Incubation usually lasts 12-14 days and it takes 9-12 days for chicks to fledge. Rufous-capped Warblers can have 1 or 2 broods each breeding season.

BEHAVIOR. They are found by themselves or in pairs for most of the year. In courtship the male calls his female with a chick or tik tune to make a sound «chit-chit-chit-chit.» Sometimes it gives a call with a higher sounding «tsi».

CONSERVATION STATUS. No conservation of this species has been attempted, but scores of specimens of these birds are in museums and continue to be studied by taxonomists. Since Mexico is one of the primaray locations they are found, many observers of these birds have concentrated in this area to learn more.

SOUNDS. The courtship song of the rufous-capped warbler is a rapid, accelerating series of chipping notes (chit-chit-chit-chitchitchit), somewhat reminiscent of the rufous-crowned sparrow, while the call notes is a hard chik or tsik, often repeated. Like other New World warblers, this species does not actually warble.