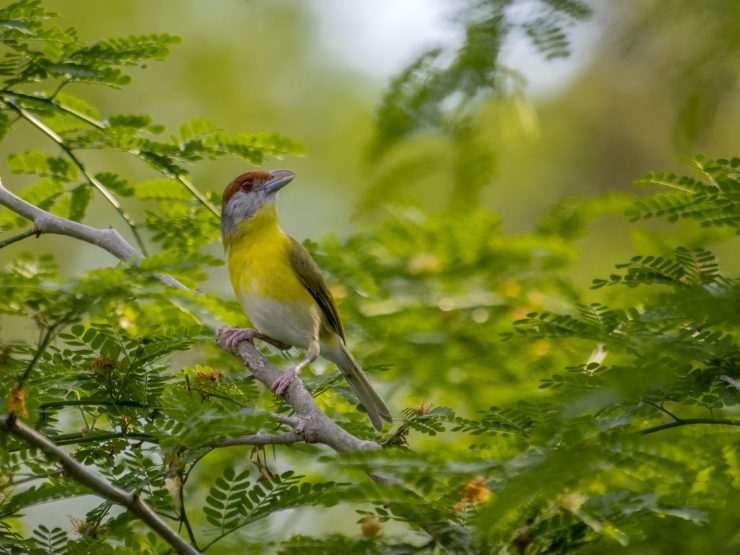 The rufous-browed peppershrike (Cyclarhis gujanensis) is a passerine bird in the vireo family. It is widespread and often common in woodland, forest edge, and cultivation with some tall trees from Mexico and Trinidad south to Argentina and Uruguay.

The adult rufous-browed peppershrike is approximately 15 cm (5.9 in) long and weighs 28 g (0.99 oz). It is bull-headed with a thick, somewhat shrike-like bill, which typically is blackish below and pinkish-grey above. The head is grey with a strong rufous eyebrow. The crown is often tinged with brown. The upperparts are green, and the yellow throat and breast shade into a white belly. The subspecies ochrocephala from the south-eastern part of its range has a shorter rufous eyebrow and a brown-tinged crown, while the subspecies virenticeps, contrerasi and saturata from north-western Peru and western Ecuador have greenish-yellow (not grey, as in the «typical» subspecies) nape, auriculars and cheeks.

It is distributed from the east of Mexico, through Central America, by Belize, Guatemala, El Salvador, Honduras, Nicaragua, Costa Rica and Panama; through South America from Colombia to the east through Venezuela, Guyana, Trinidad and Tobago, Suriname and French Guiana, to the south through Brazil (absent from much of the western Amazon), Ecuador, Peru (almost always east of the Andes, with the exception of western Ecuador and northern Peru), Bolivia, Paraguay, Uruguay, to central Argentina.

It is widely disseminated and often common in a variety of environments, such as dry forests, clareras, jungle edges (usually not in low altitude humid forests), savannas, mostly below 2000 masl, locally up to 2500 -3000 m. in the Andes. Also in plantations, eucalyptus, closed, caatingas, dirty pastures, mangroves, parks and urban streets.

It lazily stirs foliage at various heights, generally unseen, except in drier regions, where it walks lower and vegetation is more sparse. It gathers in mixed flocks but also forages alone or in pairs.5 It is a shy bird that is often heard but is difficult to observe.

It feeds on insects and spiders that it captures among the leaves of trees, although they have also been observed hunting lizards.

Its nest is shaped like a bowl and it builds it high up in the trees. It usually lays two or three light pinkish eggs slightly stained with purple-brown specks. Male and female take turns in incubation, which lasts 14 days. They both feed the chicks.

The nest is a flimsy cup high in a tree with a typical clutch of two or three pinkish-white eggs lightly blotched with brown. Like most vireos, the peppershrike ejects parasitic cowbird eggs.

The studies by Slager et al. (2014) produced a phylogeny of the Vireonidae family using mitochondrial (ND2) and nuclear data (3 Z-linked loci); These studies found deep divergences between the various lineages within the broadly defined C. gujanensis, so it could be more than one species.

According to the classification of the International Ornithological Congress (IOC) (Version 6.2, 2016) 11 and Clements Checklist v.2015, 21 or 22 subspecies are recognized, (Clements no list septentrionalis) with their corresponding geographical distribution:

Cyclarhis gujanensis flaviventris Lafresnaye, 1842 – southeast of Mexico (north of Veracruz, north of Puebla, northeast of Tabasco, north and west of Chiapas) east to Guatemala and north of Honduras.

Cyclarhis gujanensis parva Chapman, 1917 – northeast of Colombia and north of Venezuela (south to north of Amazonas).

The song is a whistled phrase with the rhythm «Do you wash every week?», but there are extensive variations depending on both individual and range. It is often heard but hard to see as it feeds on insects and spiders high in the foliage, though it has been observed to take small lizards as well.