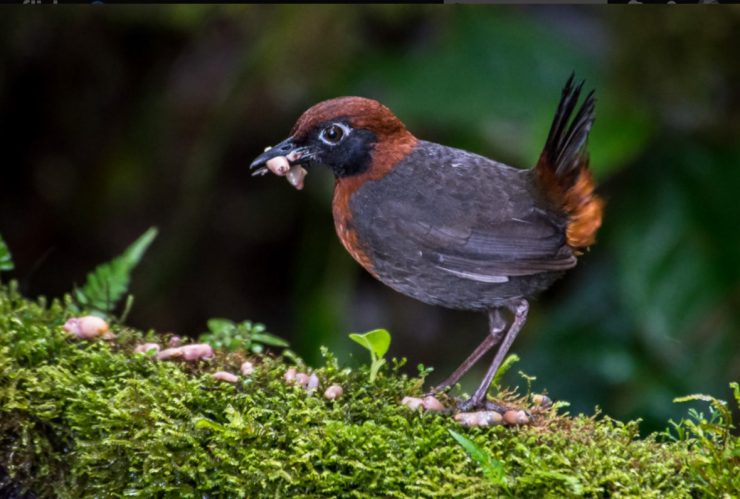 The name of the genus comes from the Latin Formica (ant) and arius (dedicated to) and refers to the behavior of some species of the family of following legionary ants and feeding on the insects disturbed by them. Rufipectus refers to the rufous coloration of the chest. The Rufous-breasted Cock is a little known bird, it is difficult to see since it prefers dense and mountainous primary forests. It is found on both slopes of the Western Cordillera from the northern end of the Valley to the south and the northern end of the Central Cordillera.

It measures 19 cm. and weighs 75 g. It is terrestrial, with a robust body, with an erect tail and a rufous chest. Adults show a black face and throat and the rest of the head dark brown. The back, rump and wings are dark brown, the upper and lower tail coverts brown and the tail blackish. The wing coverts are buffy and the chest is deep rufous. It has a dull cinnamon rufous abdomen and gray side and flanks. The rufous chest is brighter and more extensive in males. The bill is black, the orbital skin bluish white and the legs are gray.

It is similar to the Black-headed Antthrushand and the Formicarius analis, except that these two do not have a crown or chestnut brown.

In Colombia we find the carrikeri subspecies characterized by bright reddish coloration, especially on the sides of the neck and upper coverts of the tail. The nominal subspecies rufipectus (from Costa Rica to the Darien of Panama) may also be present.

They inhabit primary forests in mountainous sites, up to 2200m

It is a mainly terrestrial bird, like other species of the genus it walks delicately on the ground, pecking and removing leaves. It often follows marches of legionary ants in dense mountain forests. It is territorial throughout the year.

It is considered as a least concern