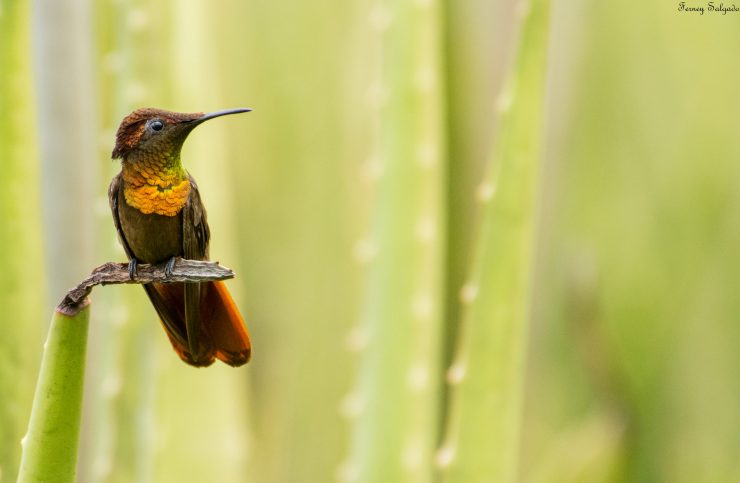 The Ruby Topaz Hummingbird is a bird which belongs to the family of Trochilidae and the order of Apodiformes.

It is measures around 8 centimeters, it has a short bill which measures approximately 15mm and is almost straight. The male is unmistakable in good light, but usually looks completely black. It has the crown and the ruby red nape on, the feathers of the forehead cover the base of the bill. In her throat and high chest has an iridescent orange topaz tone. The rest is dark olive brown above and below. It has the blackest mantle continuing to the sides of the neck up to the eyes. Its undertail pattern and tail are of a rufous brown tone; the tail has brown apex. The female on top is opaque bronze to copper green; below it is opaque greyish white. Its central rectrices are bronzed green, the rest are chestnut with a broad subterminal band brown band and a narrow white apex.

Until the 1750m. In arid enclaves of the Cordillera Occidental in the upper unclean river (Dabeiba) and in Dagua; on low Caribbean land between Cartagena and La Guajira, to the south it is distributed locally in the Valle del Cauca to Popayán and in arid parts of the Valle del Magdalena (south to Villavieja, Huila; regularly visible as far as Guadalupe), in the Katios National Park in the north west of Choco; east by the Andes from Norte de Santander (Valle del Zulia) in the south to Meta and Vichada. In the Guyanas and Venezuela, in central and southern Brazil and northeast Bolivia. From Aruba to Trinidad.

This hummingbird inhabits open country, gardens and cultivation. Usually punctual and seasonal; migration is suspected in Trinidad and Brazil.

The food of this species is nectar, taken from a wide variety of flowers, and some small insects. Ruby-topaz hummingbird males perch conspicuously and defend their territories aggressively. The call of this species is a high-pitched tsip.