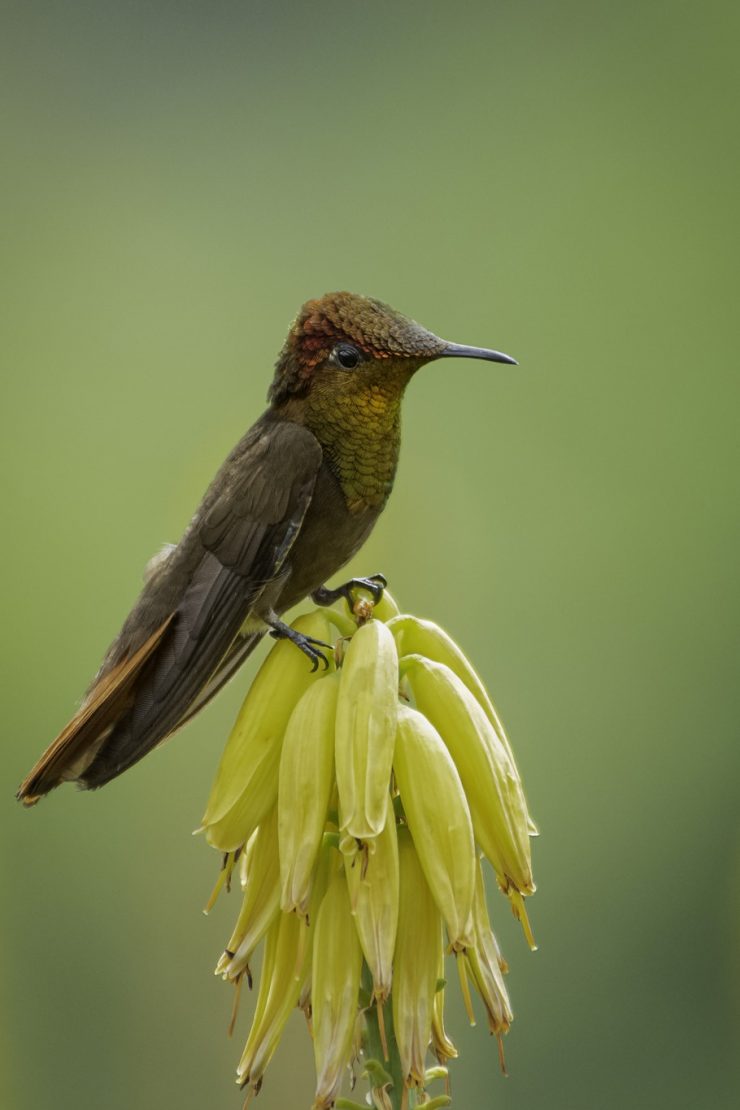 It is a small hummingbird. Short beak. Its colors range from black for the most part, with a distinctive red color on the crown. It also has iridescent orange and dark olive brown tones. They are mostly loners. It is found in the Western Cordillera and other places with arid lands.

Its length reaches around 7.9cm. It has a short beak which measures approximately 15mm and is almost straight. The male is unmistakable in good light, but usually appears completely black. It has a fiery ruby ​​red crown and nape, the forehead feathers cover the base of the bill. On its throat and high chest it has an iridescent topaz orange hue. The rest is dark olive brown above and below. It has the blackest mantle continuing down the sides of the neck to the eyes. Its infracaudales and its tail are of a rufous brown hue, the tail has a brown apex. The female above is dull bronze to coppery green; below it is a dull grayish-white hue. Its central rectrices are bronze green, the rest are brown with a broad brown subterminal band and a narrow white apex. Juvenile male is like female, but with varying amounts of orange and ruby.

The female is easily confused; the safest mark that it has to be differentiated from other hummingbirds are the brown outer rectrices with a subminal brown band and white apex.

Up to 1750m. In arid enclaves of the Western Cordillera in the high dirty river (Dabeiba) and in Dagua; in the lowland of the Caribbean between Cartagena and La Guajira, to the south it is distributed locally in the Valle del Cauca to Popayán and in arid parts of the Magdalena Valley (to the south to Villavieja, Huila; regularly visible as far as Guadalupe), in the National Park the Katios in the northwest of Choco; to the east by the Andes from Norte de Santander (Valle del Zulia) in the south to Meta and Vichada. In the Guyanas and Venezuela, in the center and south of Brazil and in the northeast of Bolivia. From Aruba to Trinidad.

Uncommon to rare in dry hills, scrublands, gallery forest edges, and gardens. Generally punctual and seasonal; migration is suspected in Trinidad and Brazil.

It has been seen feeding in the canopy of large flowering trees.

Six individuals in reproductive condition were found between June and October, in the Zulia Valley and in La Guajira. The nest is a small woolly cup decorated with lichens and supported in forked between 1 and 5m.

It is a usually solitary hummingbird which frequents flowers at varying heights, sometimes on large flowering trees. In striking display, the male flutters quickly around the female, spreading her tail in a fan shape and with her crest raised.