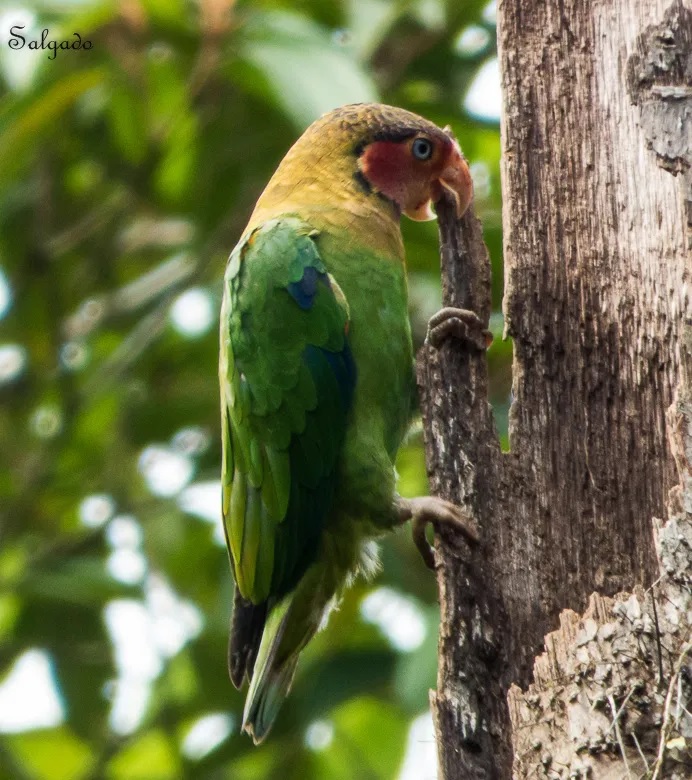 The Rose-faced Parrot was formerly considered to be conspecific with the Brown-hooded Parrot (Pyrilia haematotis), from which the present species differs most clearly in the large pinky-red facial patch, outlined with darker feathers, and the lack of red feathering on the flanks and axillaries.

The genus Pyrilia is composed of seven known species allopatrically distributed in Central and South America: P. haematotis; P. coccinicollaris; P. pulchra; P. pyrilia; P. barrabandi; P. caica; and P. vulturina. The last three species occur in the Amazon basin. Pionopsitta barrabandi is distributed along the western portion of the Amazon basin, extending from southern Venezuela to northeastern Mato Grosso (Brazil), and westwards as far as eastern Ecuador. Pionopsitta caica occurs from southeastern Venezuela to Guyana, and in the Brazilian states of Roraima and Amapa, on the left bank of the lower Amazon River. P. vulturina is distributed south of the Amazon River, from the Gurupi River to the Madeira River and southwards as far as Serra do Cachimbo. Pionopsitta is a genus in the Family Psittacidae. Recent DNA results show that Pileated Parrot is genetically far from the rest of the species currently included in Pionopsitta. The SACC has followed suit so that Pileated Parrot is the only remaining member of this genus while the rest are placed in genus Pyrilia.

It is 23 cm of lenght in length and weighs between 203 and 208 g. The plumage of the body is mainly green; the crown is dark gray and the nape is brown to the nape. It is distinguished by the conspicuous pink to reddish facial spot covering the lores, the area around the eyes, the ears, and the back of the cheeks; The front of the cheeks and chin are pale pink. From the back of the neck to the chest it has an olive to yellow color that turns green on the chest; the coverts of the lesser wings and the forewings, as well as the shoulders are orange and yellow; wing coverts and covering are dark blue; green axillary feathers; green tail, with a blue tip, and a red base. Horn-colored bill. White eye ring.

It is an inhabitant of reasonably tall forest, plantations, and second growth, usually below 1200 m, although it ranges higher locally.

Its diet is little known, but some observations indicate that it includes fruits of Oenocarpus bataua (Arecaceae) and other fruits of wild species and cultivated plants such as banana and corn.

Although considered to be generally uncommon, the species is capable of adapting to some degree of habitat modification. Like all of the genus Pyrilia, this species was until recently placed in the genus Pionopsitta.

Birds breeding above 1200m might be seasonal migrants, also some latitudinal movements supected.