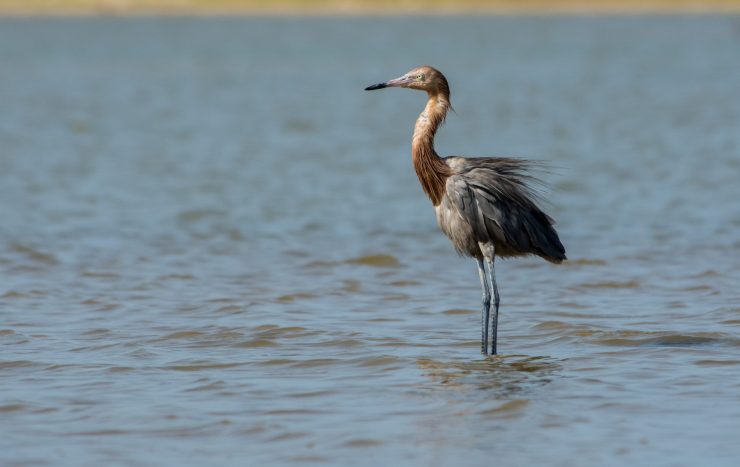 The reddish egret (Egretta rufescens) is a medium-sized heron. It is a resident breeder in Central America, The Bahamas, the Caribbean, the Gulf Coast of the United States, and Mexico. There is post-breeding dispersal to well north of the nesting range. In the past, this bird was a victim of the plume trade.

In the white phase, the adults can be confused with immature whites of the Blue Heron (Egretta caerulea), but they differ because they have the basal half of the bill gray, not pink and the legs slate blue, non-greenish. The immature ones in white phase differ from other white herons by their dark bill and legs.

Two subspecies are recognized, E. r. dickeyi and E. r. rufescens, the latter reprinted for Colombia and characterized by being darker on the head and neck.

It is found in North America, the Antilles and Central America to Colombia and Venezuela.

It inhabits salty waters such as mangroves, lakes, seas and the shores of the oceans.

Reddish egrets’ breeding habitat is tropical swamps. It nests in colonies, often with other herons, usually on platforms of sticks in trees or shrubs. These colonies are usually located on coastal islands. These birds have raucous courtship displays. They generally involve shaking of the head during the greeting ceremony, followed by chases and circle flights. They also involve raising of the neck, back and crest feathers, accompanied by bill clacking, similar to the tricolored heron.

It feeds mainly on small fish but also on frogs, crustaceans and insects.

The reddish egret is considered one of the most active herons, and is often seen on the move. It stalks its prey visually in shallow water far more actively than other herons and egrets, frequently running energetically and using the shadow of its wings to reduce glare on the water once it is in position to spear a fish; the result is a fascinating dance. Due to its bold, rapacious yet graceful feeding behavior, author Pete Dunne nicknamed the reddish egret «the Tyrannosaurus rex of the Flats». It eats fish, frogs, crustaceans, and insects. The bird’s usual cry is a low, guttural croak.