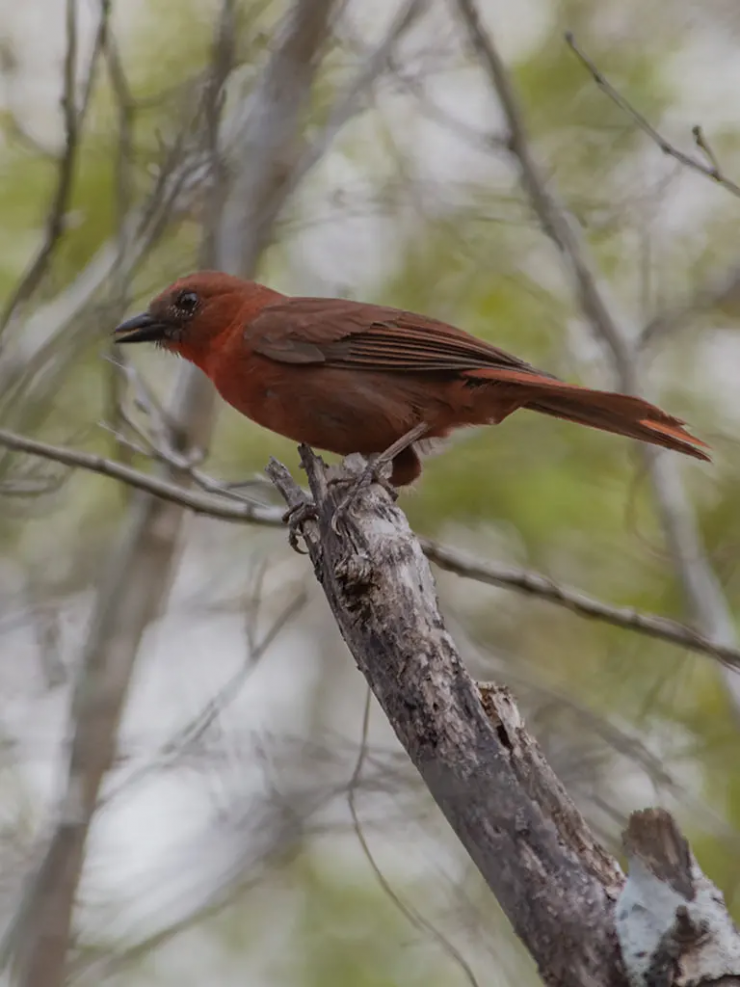 The red-throated ant tanager (Habia fuscicauda) is a medium-sized passerine bird.. It was usually considered an aberrant kind of tanager and placed in the Thraupidae, but is actually closer to the cardinals (Cardinalidae). Consequently, it can be argued that referring to the members of this genus as ant tanagers is misleading, but no other common name has gained usage.

Both sexes of this species are duller and darker than the related red-crowned ant tanager which occurs on the Pacific slope in its Central American range.

There are six known subspecies:

Very similar to the Red-crowned Ant Tanager (Habia rubica) with which it does not overlap. The male of the latter species has a bright red minor throat and a black list on the crown. The female is mainly olive not brown and has a tawny yellow patch on the crown.

It is found from southeastern Mexico to northern Colombia. In Colombia it is found below 200 m above sea level in the Caribbean from the Serranía de San Jacinto to the Atlantic. Also in the extreme north of Chocó.

It occurs in thick undergrowth at the edge of forest, second growth or abandoned plantations at altitudes from sea level to 600 m (2,000 ft). The large but untidy cup nest is usually built 1–3 m (3.3–9.8 ft) high in the fork of a shrub or tree, and is often decorated with living ferns. The normal clutch is two or three white eggs laid from April to June.

These birds are found in pairs or small groups. They eat insects, arthropods and fruit like those of Cymbopetalum mayanum (Annonaceae), and less often Trophis racemosa (Moraceae) and will follow army ant columns especially in lowlands where antbirds are uncommon. The flock will give a defensive spread-wing-and-tail display to deter potential predators.

It feeds primarily on arthropods including ants, caterpillars, beetles, and grasshoppers. Fruits, grass seeds and a snake have also been recorded in its stomach contents.

Their breeding period is probably established at the beginning of the rainy season. Apparently he has a cooperative breeding system. The nest is built by the female with the help of other subadult individuals and is a loose and bulky structure built with leaves and thick materials. It usually places it low between 1 and 5 m above the ground in a thorn bush or palm. The size of its position is 2 to 4 white eggs which only the female incubates for 12 to 14 days. The young are fed by both parents and by some helpers. They leave the nest around day 9 after hatching and before they are able to fly.