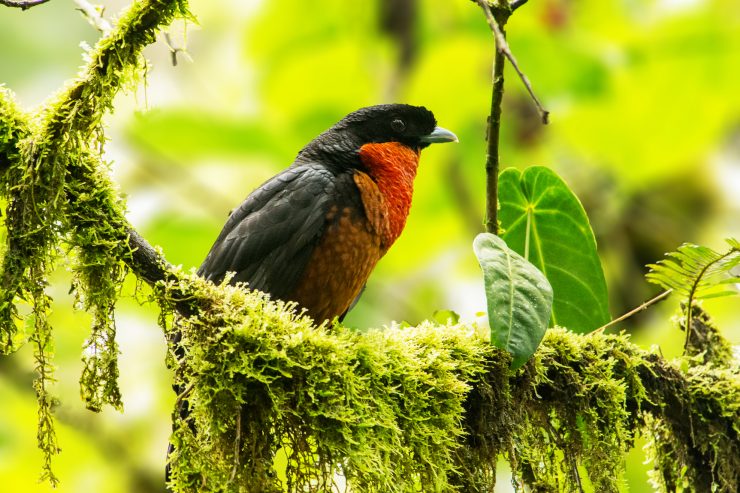 The Red-ruffed Fruitcrow is a species of bird in the genus Pyroderus, to the family of Cotingidae and the order of Passeriformes.

The males measure about 43 centimeters and the females 38 centimeters. It has a silver bill and most of the body is black with the throat, chest and sides of the neck bright orange.

Its distribution is highly disjunct, with population associated with the Tepuis in Venezuela and Guyana, the east Andean slopes in Peru, Andean slopes in north-western Ecuador, Colombia and western Venezuela, the Venezuelan Coastal Range and the Atlantic Forest in south-eastern Brazil, eastern Paraguay and far north-eastern Argentina.

It is found in humid forest, especially in highlands, but are also found in forest borders, Amazon lowlands, and in slightly drier forest.

The nest is cup shaped, normally shallow, and is made of twigs which may be lined with fern fronds. These materials allow light to pass through. Normal clutch size is one egg.

It feeds mainly on fruits and incorporates insects and lizards into its diet.