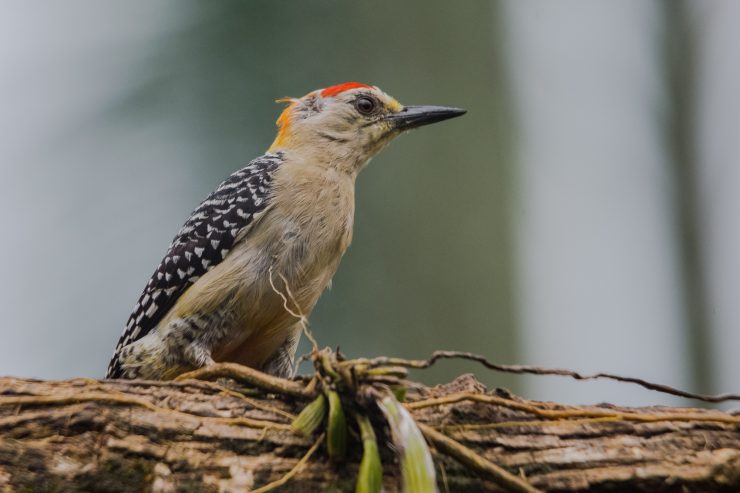 The red-crowned woodpecker (Melanerpes rubricapillus) is a resident breeding bird from southwestern Costa Rica south to Colombia,Venezuela, the Guianas and Tobago.

Adults are 20.5 cm (8.1 in) long and weigh 48 g (1.7 oz). They have a zebra-barred black and white back and wings and a white rump. The tail is black with some white barring, and the underparts are pale buff-brown.

The male has a red crown patch and nape. The female has a buff crown and duller nape. Immature birds are duller, particularly in the red areas of the head and neck.

It is common in semi-open woodland, forests, cultivated areas, parks and gardens. In areas with full wooded coverage they are more likely to be found at higher levels, while in more open areas, they tend to come to lower levels.

It nests in a hole in a dead tree or large cactus. The clutch is two eggs, incubated by both sexes, which fledge after 31–33 days.

It forages individually or in pairs at all levels of the forest, searching for insects, fruit, even taking nectar from flowers.

Apparently the species was declining in some northern areas during the first half of the 20th century, but in recent decades the trend has reversed and it has extended its range to the north. Overall population seems stable or may be increasing slightly.

This common and conspicuous species gives a rattling krrrrrl call and both sexes drum on territory.