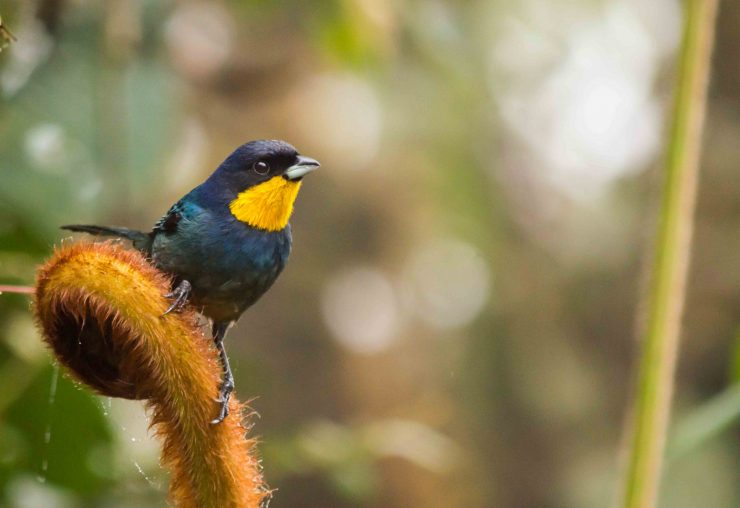 The Purplish-mantled Tanager is an Almost Endemic species of Colombia, characterized by its purple color throughout the body and its yellow throat. Iridosornis means rainbow bird and derives from the Greek roots iris = rainbow and ornis = bird and porphyrocephala comes from the Latin porphyro = purple and cephalus = head. This species is in the Near Threatened category.

It measures between 14 and 15 cm. Its body is mainly purple-blue, with a bright yellow throat contrasting with the rest of its body. The front part of his face is blackish and the center of the abdomen buffy. Their wing coverts have black spots and their tail is of a darker shade.

It is usually easily confused with Yellow-throated Tanager (Iridosornis analis) but it differs because this species has the yellow of the throat extended to the chest. However, the presence of this species in Colombia is uncertain.

This species is found from Colombia to the southeast of Ecuador. It is an uncommon bird, in Colombia it is distributed between 1,500 and 2,300 m above sea level in western Cauca and up to 2,700 m above Medellín. Also on the western slope of the Western mountyain range and on both sides of the Central mountain range in Antioquia.

It lives in humid forests, on edges and secondary forests and occasionally in less humid areas.

It feeds mainly on fruits and insects.

Young have been recorded between May and June in the Central and Western mountain ranges. Also juveniles in the month of July in the town of Munchique. Many aspects of their reproductive biology are unknown.

Generally solitary and in pairs or family groups. Follows mixed flocks in search of food and forages between 2 and 10 m in the interior or at the edges of forests.

Formerly named Iridosornis porphyrocephala, but because Iridosornis is male, its epithet was changed to the male porphyrocephalus. It has been considered to form a superspecies with I. analis and has sometimes been treated as conspecific. The evidence for treating these two species separately is still very weak.

It is considered a Near Threatened species. The loss and degradation of its habitat are the main causes of reduction of its population and have been the result of agricultural, livestock and mining activities. It is necessary to carry out studies to determine the actual state of conservation of the species.