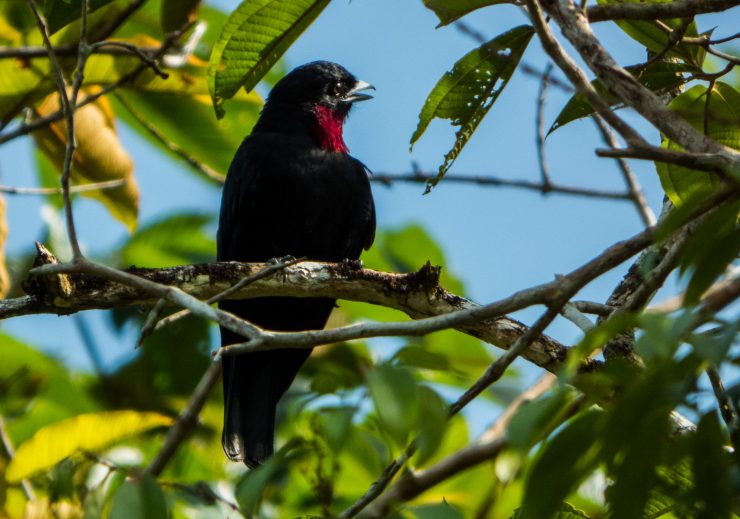 The purple-throated fruitcrow (Querula purpurata) is a species of bird in the family Cotingidae, the cotingas. It is the only species of the genus Querula. It is native to Nicaragua, Costa Rica and Panama and most of the northern half of South America, its habitat being humid lowland forest where it feeds mainly on insects and fruit. It is a glossy black, medium-sized bird and the male has a purple-red throat patch. It nests in close vicinity with other birds of its species. Its population is in decline, but it is a common species with a very wide range, and the International Union for Conservation of Naturehas assessed its conservation status as being of «least concern».

It is a stout medium-sized glossy-black bird. Males have a large purple-red upper throat patch, (similar to the gorget of the hummingbirds), extending to the side of the neck. It has a short wide pointed grayish bill, black eyes, and gray legs.

It´s the only species of the genus Querula

The purple-throated fruitcrow ranges across northern South America, with populations west of the Andes cordillera extending into Central America to Nicaragua. It goes from the Guianas and Maranhão state, northeastern Brazil in the east, and throughout the Amazon basin to the Andes foothills in the west; it is only absent in the Amazon Basin in the northeast and north central bordering the Guiana Highlands and southern Venezuela; otherwise the range is contiguouseast of the Andes. Its population trend is thought to be downwards but it is a common species with a very wide range and the International Union for Conservation of Nature has assessed its conservation status as being of «least concern».

Mainly frugivorous bird during the non-reproductive period. During the reproductive period, reduce the consumption of fruits which alternates with the intake of foods of animal origin. This species has been reported to consume fruits of Trattinnickia lawrencei (Burceraceae), Ocotea sp. (Lauraceae), Hebepetalum humiriifolium and Roucheria columbiana (Hugoniaceae) and Micropholis venulosa (Sapotaceae).

Reproductive events have been recorded between February and July in Colombia, in the period June – July in Panama, and between January and April in Guyana. Build a flat nest with sticks and lianas in which they lay a dark olive green egg. The young remain in the nest for about 33 days.

Despite its name, the purple-throated fruitcrow feeds on insects as well as fruit, moving through the forest canopy in small chattering groups. It also nests colonially, with little attempt to hide the nests which are rendered more conspicuous by the noisy group of birds nearby.