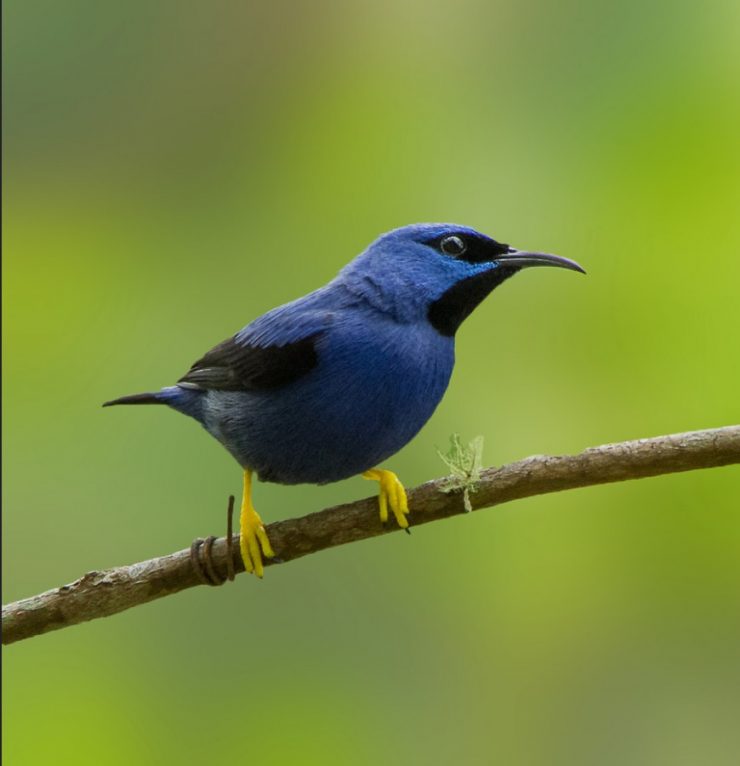 The purple honeycreeper (Cyanerpes caeruleus) is a small bird in the tanager family. It is found in the tropical New World from Colombia and Venezuela south to Brazil, and on Trinidad. A few, possibly introduced birds have been recorded on Tobago. The species is a bird of northern South America, and besides the Amazon Basin and the Guianas, a coastal range occurs west of the Andes, including parts of southern Panama. In the south, its range extends to the extreme western Pantanal. Though it is most frequently seen in the lowlands up to 3,300 ft (1,000 m) ASL or so, it has been encountered as high as 7,500 ft (2,300 m) ASL.

It is 11 cm long, [5] weighs about 12 g. It has a long black curved bill. Like the other species of its genus, it has a very pronounced sexual dimorphism. The male is purple with black edged wings and bright yellow legs. Females and immatures have a green back, and green with yellowish stripes on the underparts. The throat is tan, and they have a blue stripe on both sides of the bill. The call is a high, sharp «zrií.» The subspecies of Trinidad C. c. longirostris has a larger bill than continental varieties.

The species C. caeruleus was described for the first time by the Swedish naturalist Carlos Linnaeus in 1758 under the scientific name Certhia caerulea; its type locality is: «Surinam». [4]

The masculine generic name Cyanerpes is made up of the Greek words «kuanos»: dark blue, and «herpēs»: climber; and the name of the species «caeruleus» from Latin which means blue, azure blue. [7]

For a long time it was considered conspecific with the glistening honeydew (C. lucidus). Recent extensive phylogenetic studies confirm that the present species is a sister to Cyanerpes cyaneus, and the pair formed by both is a brother to the pair formed by Cyanerpes nitidus and C. lucidus.

According to the classifications of the International Ornithological Congress (IOC) [9] and Clements Checklist / eBird v.2019 [10], five subspecies are recognized, with their corresponding geographic distribution:

Cyanerpes caeruleus microrhynchus (Berlepsch), 1884 – east of Colombia to south of Venezuela, north of Bolivia and west of the Brazilian Amazon.

It is widely distributed throughout the Amazon basin and the Guiana shield, from the south and southeast of Colombia, south and east of Venezuela, Guyana, Suriname, French Guiana, east of Ecuador, east of Peru, to the west of Bolivia and in almost all from the Brazilian Amazon south to the extreme west of the Pantanal. It is also distributed in the Cordillera de la Costa de Venezuela and in Trinidad (a few birds, possibly introduced, have been recorded in Tobago), in the Andean foothills from western Venezuela to eastern Colombia, and on the Pacific slope from the eastern tip of Panama, western Colombia to southwestern Ecuador.

This species is widely disseminated and often common in its natural habitats: the canopy and edges of humid forests and adjacent lowland clearings up to 1,200 m elevation, [5] although it has been found at altitudes of up to 2,300 m. It is a species that inhabits the canopy, but also appears in cocoa and citrus plantations. At the upper limit of its altitudinal range, it frequents the foothills, usually with relatively low trees (10-15 m) and abundant in epiphytes and mosses.

The female Purple Honeycreeper builds a small cup nest in a tree, and incubates the clutch of two brown-blotched white eggs.

They are often in large groups and/or mixed tanager flocks. They have a wide diet including insects and nectar as well as fruit.

It is often found in small groups. It feeds on nectar (in particular on bromeliads and similar flowers, to which the shape of the beak is perfectly adapted), berries and insects, mainly in the canopy. It is a bold and inquisitive bird, responding quickly to the call of the caburé owl (Glaucidium brasilianum) by emerging from the cover and looking for the predator and adopting an aggressive position. The female builds a nest the size of a small cup in a tree, and incubates two brown-colored eggs with white spots for two weeks.

This species has a large range, with an estimated global Extent of Occurrence of 6,700,000 kmÂ². The global population size has not been quantified, but it is believed to be large as the species is described as ‘common’ in at least parts of its range (Stotz et al. 1996). Global population trends have not been quantified, but the species is not believed to approach the thresholds for the population decline criterion of the IUCN Red List (i.e. declining more than 30% in ten years or three generations). For these reasons, the species is evaluated as Least Concern.