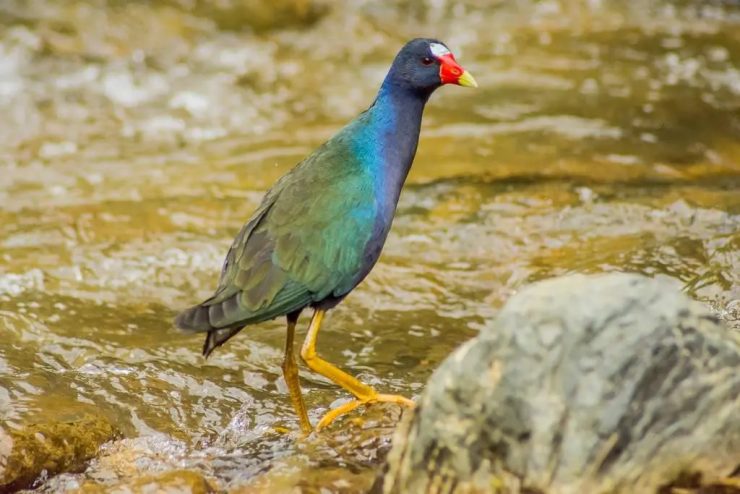 The purple gallinule (Porphyrio martinica) is a swamphen since it has the genus Porphyrio. They are in the order Gruiformes, which means «crane-like», and within the order there are cranes, rails, and crakes. The purple gallinule is a rail species which places them into the family, Rallidae. They are also known locally as the yellow-legged gallinule. The specific name martinica denotes «of Martinique».

This is a medium-sized rail, measuring 26–37 cm (10–15 in) in length, spanning 50–61 cm (20–24 in) across the wings and weighing 141–305 g (5.0–10.8 oz). Males, averaging 257 g (9.1 oz) in mass, are slightly larger than females, at 215 g (7.6 oz) on average. An adult purple gallinule has purple-blue plumage that will shine green and turquoise when in good lighting. Adults also have a pale blue shield on their forehead, which connects with the red and yellow bill. Darkness or low light can dim the bright purple-blue plumage of the adult to make them look dusky or brownish, although the forehead shield color differentiates them from similar species such as common gallinules. Immature purple gallinules are a brown-bronze color, with purple feathers on chest, and the bill and forehead shield is pale in color. Juvenile birds are light brown with hints of green-bronze on the wings and back, and white under-tail coverts.

Purple gallinules have long legs with long toes that help them walk onto of the floating vegetation, by distributing their weight. They have an anisodactyl toe arrangement that also helps them to cling to plant stems. Adults have bright yellow legs and feet, immatures have brown-yellowish legs and feet, and juveniles have brown legs and feet.When they fly, which is short distances, their legs hang down.

The adult is unmistakable thanks to its bright coloration. The immature can be confused with the Azure Gallinule (Porphyrio flavirostris). It is distinguished from the adults of this species by its larger size, sides of the head and neck, and bluish frontal shield in contrast to a darker bill. Immature due to its larger size, back without stretch marks and more brown rump and tail.

The habitat that this species is found in, is freshwater marsh that have dense stands of vegetation. These birds are found in the southeastern states of the United States during the breeding season. They are resident species in southern Florida, Gulf and Pacific coast of Mexico, parts of Central America, and Caribbean. During the non-breeding season, they are found more inland in parts of Central America. They can also be found within South America during migration, and sometimes strays can be found as far north as Canada.

The species has the greatest pattern of vagrancy amongst rails, with individuals recorded as far west as California and the Galápagos Islands, as far north as Iceland and Labrador, as far south as Tierra del Fuego, and as far east as Great Britain, Portugal and Cape Verde.

This species has been recorded in Cape Province of South Africa 21 times. Of the 21 one times found within South Africa most all of the birds where juveniles, so it is very unlikely that a breeding ground will be established there.

The Nest is voluminous made of herbs or rice stalks, it is made lightly on the water in the swamps or rice fields. They lay 4-7 cream-colored eggs with brown dots. They are floating nest that are within the dense vegetation along shallow margins of lakes, rivers, and marshes shorelines. They lay between five to ten eggs, that are a buff or pale pink with brown and purple spots. Purple gallinules nest and territories are defended by the monogamous pair, and the juveniles remain in the territory to help care for siblings.  Purple gallinules are omnivorous ground feeders. There is a variety of plant and animal matter within their diet. Some of the foods they consume are seeds, leaves and fruits of both aquatic and terrestrial plants, insects, frogs, snails, earthworms, and fish.  They have also been known to prey upon the eggs and young of other bird species.

The courtship of purple gallinules occurs while they are standing, and can be displayed by both sexes. Courtship occurs when the birds of a pair have been separated, and then wander close to one another. They then perform the principle display which is performed by both sexes at the same time. This display entails the bird standing in a slightly bent forward position, with the neck outstretched, and holding the wings at an almost right angle to the body and bent at the wrist, so that the primaries are angled down. Following the principle display one or both of the birds, will strut and cut across the path of the other with half-lowered wings, or they will make a deep bow as they approach each other.

Their diet is omnivorous, including a variety of plants and animal matter, including seeds, leaves, and fruits of aquatic and terrestrial plants, as well as insects and frogs. Occasionally eggs of other species.

In Meta, rice growers report that it does mechanical damage to the mature rice plants, due to its habit of forming built-up platforms by bending rice plants in their most advanced stages. As a consequence, some practice the poisoning and removal of nests or control of the adults. The impacts of blue cock nesting and the consequences of these controls on their populations have not been quantified.

In a study of its diet, the intake of fragments of the same species was recorded, so it is considered that this cock could occasionally consume carrion (Mckay 1981).