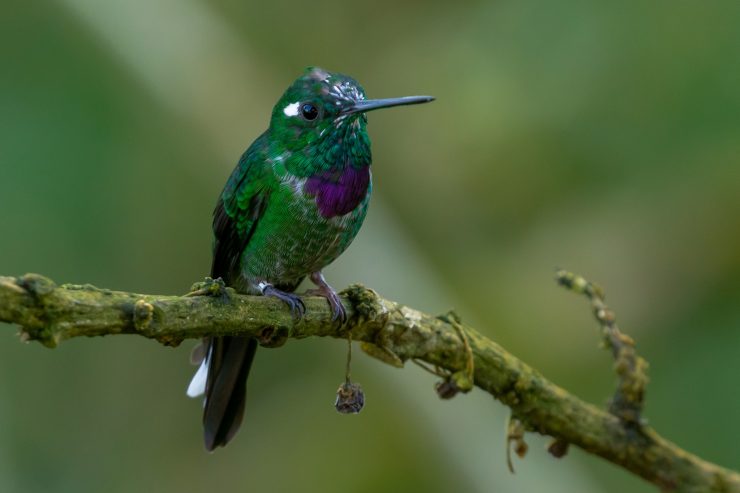 It is a small hummingbird with a short beak, endemic to the biogeographic Choco. It has an iridescent purple pectoral crescent and conspicuous, mainly white inner rectrices. Its name Urosticte means spotted tail and derives from the Greek roots oura = tail and stiktos = spotted. The Benjamin Pitet was established in honor of the naturalist and merchant John Benjamin Leadbeater.

It measures about 8 cm, has a short, straight 20mm beak, and weighs about 3.8g. It presents sexual dimorphism. It has glossy dark green upperparts, including the head and cheek with a prominent white postocular point. The throat is bright green with a large iridescent purple pectoral crescent bordered on the underside by a green-spotted white stripe. The underparts are green stained with white and its tail is forked black with a deep green luster at the tips. The pair of internal wheelhouses have a white distal third part, which makes them visible when flying and unique among hummingbirds.

The female has white underparts dotted with bright green and the top is glossy dark green. The tail is dark green forked with the three outer wheelhouses with white tips. The young are similar to the females; males have a buff-tan shadow on the throat and the belly is darker.

This species is found on the Pacific slopes of the Andes in Colombia and Ecuador and also in the northeast of Peru. In Colombia it is found from 700 to 1600 m above sea level from the headwaters of the San Juan River to the south.

It is a rare inhabitant and difficult to observe in humid and very humid jungles where it also uses edges and small clearings of the forest.

It feeds mainly on the nectar of small flowers among which have been recorded those of the genera Psammisia, Satyra (Ericaceae) and Palicouera (Rubiaceae). It also feeds on the nectar of the flowers of various species of bromeliads and is commonly seen catching Diptera in flight.

Reproductive events have been recorded in December in the Ñambí River Nature Reserve. It breeds between January and April in Ecuador. The nest is a compact cup built with mosses and fern located in bushes or vines that grow over ravines. Incubation is 16 to 18 days.

It is a solitary hummingbird that prefers the interior of the forest where it remains hidden among the foliage. Follow foraging routes, especially females and males can defend flower patches.

It was previously considered conspecific with the Ruffed Hummingbird (Urosticte ruficrissa) and the latter was considered by some a subspecies. The SACC in 2005 determined that they were independent species. At the moment the taxonomy of intermedia is uncertain.