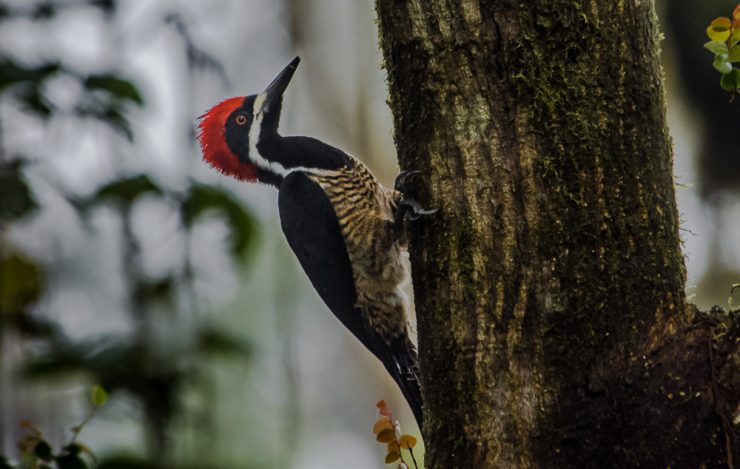 The Powerful Woodpecker is a large, robust woodpecker in the genus Campephilus and family Picidae, that includes the largest black woodpeckers.

Powerful Woodpecker ~34.5 cm (13.6 in). The Powerful Woodpecker has black upperparts with two white stripes on the shoulders that meet in the back. The male has rusty underparts heavily barred black with the breast, front of the neck, and throat black. Both sexes have a white line from the base of the bill down the sides of the neck. The male has a black forehead, sides of the head, and red crest. The female resembles male but on the head, the red is replaced by black. The juvenile is duller, usually browner than adults. The back shows more barring. The underparts are greyer with broader barring. The head pattern is similar to adults, but the crest feathers are longer.

It is similar to Lineated Woodpecker and Crimson-crested Woodpecker, but it favors humid montane forest and has little to no overlap with typical lowlands large woodpeckers.

It is found in Colombia, Ecuador, Peru, and Venezuela.

Its natural habitat is subtropical or tropical moist forests in the Andes. It is generally found at higher elevations than any other large woodpecker. The species occurs mainly between 1,700 and 2,600 meters of elevation, but it can be seen from 900 meters to 3,750 meters according to the range.

Because of their large size, they have to do more than most Picidae to maintain their hold on a vertical support. Their legs are directed more outwards while clinging to the tree trunk, and all four toes are directed forwards.

The Powerful Woodpecker’s diet is poorly known. However, the Picidae feed primarily on insects and larvae and various arthropods, with in addition some nuts, acorns and fruits.

The food is usually obtained from dead or rooting wood, by probing deeply into holes and bark crevices. It also probes for insects into the luxuriant coat of mosses and lichens covering the tree trunks in the cloud forest.

Reproduction of this species.

From an observation in NE Ecuador, the nest and the breeding biology of the Powerful Woodpecker are described.

The species nests in cavity excavated in tree trunk, placed between 5,5 and 14 meters above the ground for the two studied nests.  One nest was found in October 2002 and a second nest in May 2008. The cavities were unlined, or only with wood chips. They were excavated in dead trunks at the edges of the primary forest.

The female lays two all-white eggs. The incubation may last 16 to 19 days and apparently both adults share this period.

At hatching, the chicks are naked and their skin is pink. They fledge 34-37 days after hatching. At 33 days old, the young resembles adults but it has dark eyes.

This species could have two well-defined breeding peaks in the year. But more information is required.

The Powerful Woodpecker is threatened by habitat loss through deforestation and agriculture expansion, especially in Venezuela. The species is local in Colombia, and rare or uncommon in Ecuador. It is rare in Peru.

This species occurs in protected reserves and national parks and the population is apparently stable.

The Powerful Woodpecker is currently evaluated as Least Concern.