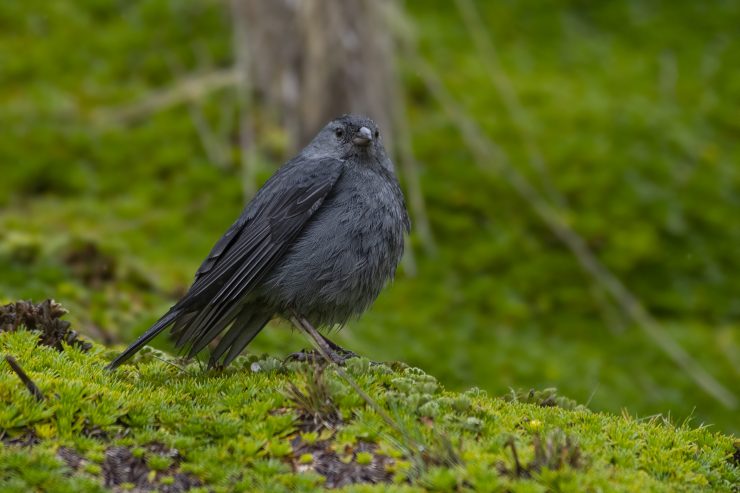 Geospizopsis unicolor, also known as the Moorland sparrow (Colombia), is a species of passerine bird belonging to the genus Phrygilus that is part of the Thraupidae family. It is native to the Andean region in South America.

It measures 15 cm in length. It exhibits a remarkable sexual dimorphism. The plumage of the male is uniformly leaden gray, lighter below. Whitish underflows, blackish wings and tail. Slate bill and legs. Northern females are brown above and whitish below, with thick brown streaks both on the back and below; the wings with whitish bars. Females further south are virtually identical to the male, that is, all gray; back and crown may be streaked dark brown. The immatures of both sexes are similar to the female.

It is distributed throughout the Andes mountain range from western Venezuela to Tierra del Fuego, including Argentina, Bolivia, Chile, Colombia, Ecuador and Peru.1 See details in Subspecies.

It inhabits the Andean moorland and grasslands, being more numerous towards the north. Mainly between 3000 and 4600 m of altitude, but lower in Argentina, especially in the winter, when it sometimes drops to almost sea level.

They usually walk in small groups, quite tame, foraging on the ground and sometimes flying to perches on rocks or bushes. Regularly in the company of other montane Seedeater and sparrows.

Its basic diet is of seeds that it searches in the ground or in the stems and also invertebrates to feed the chicks.

It occurs between November and January, in the austral summer (at least in central Chile). It nests among the stones of some rocky wall or stony ground on the slopes of hills. The nests are lined with soft material, such as horse mane or others, where it lays 2 to 3 pale greenish-blue eggs with many purple-brown spots, measuring 20 x 15 mm.

Traditionally placed in the Emberizidae family, this genus was transferred to Thraupidae based on various genetic studies, citing Burns et al. 2002, 2003; Klicka et al. 2007 and Campagna et al. 2011. Proposal No. 512 to the South American Classification Committee (SACC) of November 2011, approved the transfer of various genera (among which Phrygilus) from Emberizidae to Thraupidae.

Geographic variations are complex. The subspecies are divided into three main groups, differentiated by plumage tones: northern group (nivarius and geospizopsis), generally paler males, darker females, markedly striated and washed yellowish-brown below; central group (Inca), males with darker plumage, gray females similar to males; and southern group (tucumanus, nominal, cyaneus and ultimus), intermediary males in plumage, dull brown females with a darker striatum than northern females. The proposed subspecies grandis (described from the Páramo de Santa Isabel, in the central Andes of Colombia), supposedly larger than geospizopsis, but its measurements largely overlap; it is treated as a synonym for the latter.

It is not very vocal (notably less than the commoner yal (Phrygilus plebejus), the song, rarely heard, is a simple short «zhrii».