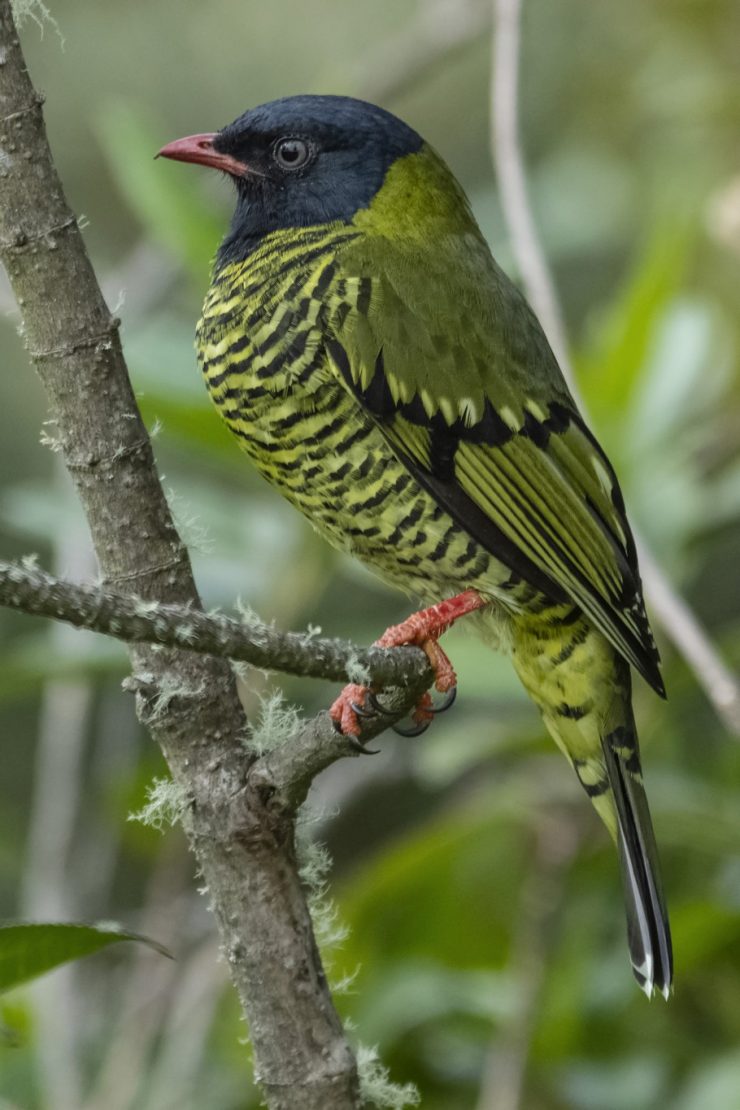 The barred fruiteater (Pipreola arcuata) is a species of bird in the family Cotingidae, found in Bolivia, Colombia, Ecuador, Peru, and Venezuela. Its natural habitat is subtropical or tropical moist montane forests. The population is stable, and they are considered common.

This bird is the largest of the fruiteaters and the only one with barred underparts in both sexes. It is a dumpy, rather sluggish bird, growing to a length of 23 cm (9 in). The male has a glossy black head and throat, and the remainder of the upper parts is greenish-brown. The tail is tipped with black and the wings have large areas of yellowish spotting. The underparts are finely barred in black and pale yellow. The head, throat and upper parts of the female are entirely greenish-brown and the underparts are similar to those of the male. Birds at the northern end of the range have orange-red irises while those at the southern end are pale grey or olive. The legs and beak are orange-red. The song is a faint, high-pitched «seeeeeeeh».

Similar to the Black-green Fruit Bowl (Pipreola riefferii) but it is distinguished from the latter by presenting black bars on the lower parts and a black subterminal band on the tail.

Two subspecies P. a. viridicauda. and P. a. arcuata of which the latter is found in Colombia. Its differentiation was established based on the proportion of black and green that the guidelines cover.

The barred fruiteater is native to mountainous parts of South America. Its range extends from Venezuela, Colombia and Ecuador to Peru and Bolivia and its altitudinal range is from 2,250 to 3,300 metres (7,400 to 10,800 ft), going higher than any other fruiteater. It usually moves through the forest singly or in pairs, but at particularly fruitful trees, several birds may congregate.

It lives in humid and very humid tropical forest, generally in the interior of the forest.

Their diet is mainly fruit-based.

There are reports of individuals in reproductive condition in the month of May in the Perijá mountain range, but many other aspects of their reproductive biology are unknown.

It is a confident bird, usually solitary or in pairs, and forages in the middle or lower levels of the forest.

P. arcuata has a very wide range and is common over much of that area. The total area of occupancy is about 259,000 square kilometres (100,000 sq mi). Its population seems to be steady, and the International Union for Conservation of Nature has assessed its conservation status as being of «least concern».