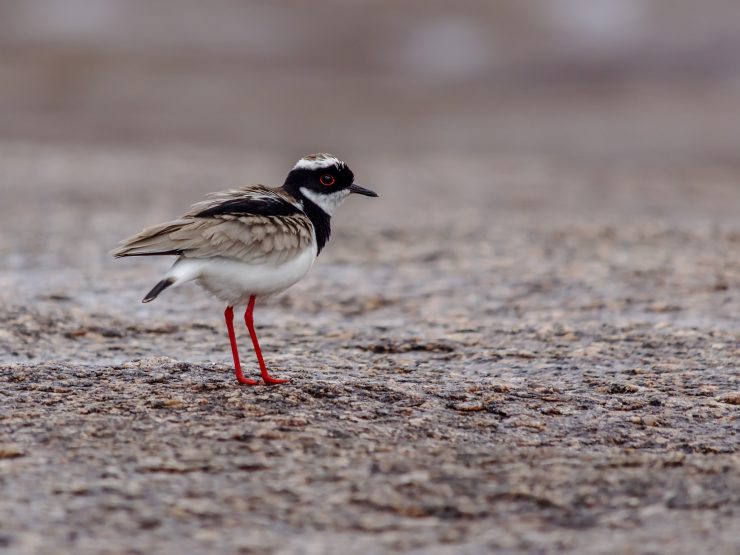 It is a very striking small bird of mainly black and white coloration that is found east of the Andes. The term cayanus was used in the principles of ornithology to refer to a bird of doubtful origin, probably from the Amazon.

It measures 21 to 24 cm and weighs 55 to 84 g. Both sexes are similar. It has very long red legs, an eye ring of the same color and a brown bill. It has brown crown bordered with white, front, sides of the head, nape, high back and wide black pectoral collar. It has broad white wingbars through the secondary feathers, the greater coverts and the inner coverts of the primaries. The rest of the tops are brown. Underneath it is mainly white and in flight shows black bands on the sides of the back and the distal half of the tail. Juveniles are similar to adults but with a more brownish mask, dark gray pectoral band, and upper parts with buff brown feather margins.

Unmistakable, it is much smaller than the Southern Lapwing (Vanellus chilensis) and with a very different black and white distribution.

Use sandbars in ponds in the savannah and in rivers near wooded areas.

It has been observed feeding on insects including bed bugs, beetles, ants, bees, bumblebees and wasps. Although less frequently it can also feed on snakes and myriapods.

In Colombia, copulations have been recorded in December and nests in July. It makes a scratched nest in the ground in which it lays 2 to 3 olive-colored eggs dotted with dark brown, especially at the larger end. Their mating displays include wavy flights with constant calls and positioning one bird in front of the other with open wings. When they leave the nest they leave the eggs covered with sand.

It is a surly bird that remains solitary and is rarely seen in small groups. It runs short distances quickly and when it lands it does so close to water, pecking at sand or wet mud.

Sometimes it has been located in the monospecific genus Hoploxypterus.

It is considered a species of least concern