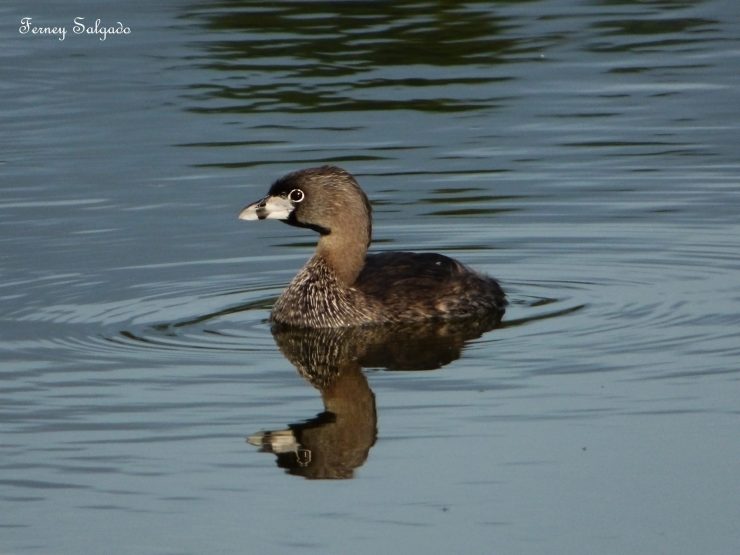 The pied-billed grebe was described by Carl Linnaeus in the 10th edition of his Systema Naturae in 1758 as Colymbus podiceps. The binomial name is derived from Latin Podilymbus, a contraction of podicipes («feet at the buttocks», from podici-, «rump-» + pes, «foot»)—the origin of the name of the grebe order—and Ancient Greek kolymbos, «diver», and podiceps, «rump-headed», from podici- + New Latin ceps.

Outside its own genus, the closest relatives of the pied-billed grebe are the small grebes of the genus Tachybaptus.

Pied-billed grebes are small, stocky, and short-necked. They are 31–38 cm (12–15 in) in length, with a wingspan of 45–62 cm (18–24 in) and weigh 253–568 g (8.9–20.0 oz). They are mainly brown, with a darker crown and back. Their brown color serves as camouflage in the marshes they live in. They do not have white under their wings when flying, like other grebes.Their undertail is white and they have a short, blunt chicken-like bill that is a light grey color, which in summer is encircled by a broad black band (hence the name). In the summer, its throat is black. There is no sexual dimorphism. Juveniles have black and white stripes and look more like winter adults. This grebe does not have webbed feet. Its toes have lobes that come out of the side of each toe. These lobes allow for easy paddling. When flying, the feet appear behind the body due to the feet’s placement in the far back of the body.

It may be confused with the least grebe, although that species is much smaller and has a thinner bill. Other similarly sized grebes are very distinct in plumage, i.e. the eared grebe and horned grebe. Both species bear much more colorful breeding plumage, with rufous sides, golden crests along the side of the head against contrasting slaty color (also a rufous neck in the horned); while in winter, both the eared and horned grebes are pied with slaty and cream color and have red eyes.

Its call is unique, loud and sounds like a «whooping kuk-kuk-cow-cow-cow-cowp-cowp.» Its call is similar to the yellow-billed cuckoo.

They are most commonly found throughout North America, Central America and South America year round. During the summer breeding season, they are most prevalent in central, northern and northeastern Canada. If they live in an area where the water freezes in the winter, they will migrate. Migrating birds generally meet with year-round birds in September and October. They migrate at night. Most migratory birds leave in March or April. They make occasional appearances in Europe and Hawaii. In the United Kingdom, pied-billed grebe visits have numbered 37 sightings as of 2007, appearing generally in October to January. One bird in England bred with a little grebe, producing hybrid young. It is the only grebe on record to have visited the Galapagos Islands.

Pied-billed grebes are found in freshwater wetlands with emergent vegetation, such as cattails. They are occasionally found in salt water. When breeding they are found in emergent vegetation near open water, and in the winter they are primarily found in open water due to the lack of nests to maintain. They may live near rivers, but prefer still water. They may be found in higher elevations when migrating. They will breed in restored and man-made wetlands.

Pied-billed grebes rarely fly. They make a slow dive frequently, especially when in danger, diving to about 20 ft (6.1 m) or less.They dive for about 30 seconds and may move to a more secluded area of the water, allowing only the head to be visible to watch the danger dissipate. This frequency in diving has earned them the description of being reclusive or shy in nature. It has also earned them nicknames like «hell-diver» They rarely spend time in flocks. Their courtship include calling and sometimes duets. Males will show territorial behaviour if another male is at the edge of his territory. They face each other and then turn their heads and bills up. Then they turn away and start calling. Then they turn back around to look at one another.

The pied-billed grebe breeds in south-central Canada, throughout the United States, Central America, the Caribbean, and temperate South America. These grebes may lay up to two sets of eggs a year. Their nests sit on top of the water, their eggs sitting in vegetation that resides in the water. Grebes lay between three and ten bluish white smooth elliptical eggs with the female starting the incubation process. They are incubated for around 23 days by both parents, with the female taking over incubation duties towards the end of that time period. They will cover the nest with nesting material if they have to leave it for an extended period of time.

Young grebes may leave the nest within one day of hatching. They are downy at birth. Yellow skin is seen between the lore and top of the head. They do not swim well and stay out of the water. They sleep on their parents’ backs. Within four weeks they start swimming. When alerted they will climb on the back of a parent grebe and eventually mature to dive under the water like their parents. Both parents share the role of raising the young – both feeding and carrying them on their backs. Sometimes the parents will dive underwater to get food with the chicks on their backs.

Pied-billed grebes feed mainly on aquatic invertebrates, and also on small fish and amphibians (frogs, tadpoles). They dive to obtain food. Their bills allow them to crush crustaceans, like crawfish. They may also eat plants. They have been shown to eat their own feathers, like other grebes, to aid in digestion (prevent injury from small bones). They will also feed their feathers to their young.

They are extremely sensitive to disturbances, especially by humans. While breeding, if scared, adults may abandon their nests without protecting the eggs. The waves from boats can destroy the nests and t gheir sounds easily frighten the birds.

Pied-billed grebe feathers are thick and soft. Their feathers were formerly used as decorations on hats and earmuffs and they were hunted in the eastern United States, in the 19th century.

The grebes are declining in New England. The reasons are unknown. The states of Connecticut and New Hampshire have declared the pied-billed grebe as endangered. In New Jersey and Massachusetts, they have been declared threatened. In Vermont they are of «special concern» In Rhode Island they are locally extinct.

Habitat loss is the grebe’s biggest threat. The draining, filling, and general destruction of wetlands causes a loss in their breeding habitats. However, they are still common in the majority of their distribution areas.