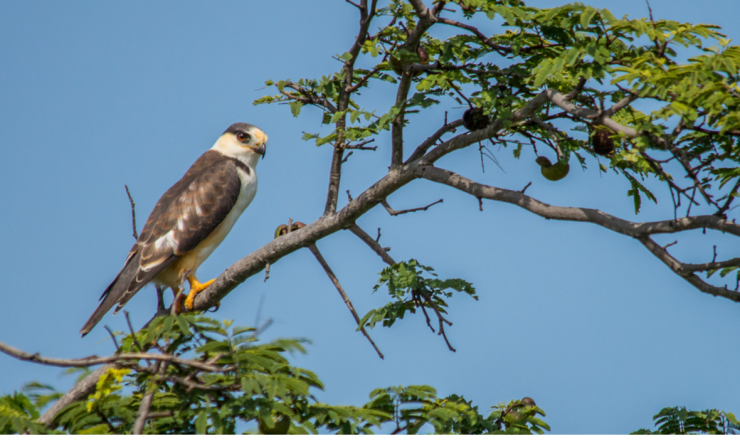 The Pearl Kite is a very small raptor found in open savanna habitat adjacent to deciduous woodland. It is the only member of the genus Gampsonyx. The scientific name commemorates the English naturalist William Swainson.

The pearl kite is 20.3–23 cm (8.0–9.1 in) in length and weighs 80–95 g (2.8–3.4 oz). It is the smallest raptor in the Americas and one of the two smallest accipitrids in the world (besides the little sparrowhawk). The tiny hawk, another neotropical species, attains a slightly higher weight than the pearl kite. The adult has a black crown, upperparts, wing and tail, a rufous edged white collar, yellow forehead and cheeks, mainly white underparts, and yellow legs. Immature birds are similar to the adults but have white and chestnut tips to the back and wing feathers, a buff collar and some buff on the white underparts. In flight this species looks mainly black above and white below. The northern form G. s. leonae differs from the nominate G. s. swainsonii in that it has rufous flanks.

American Kestrel (Falco sparverius) and Aplomado Falcon (Falco femoralis). In flight none of these have a white trailing edge of the wing. A. Falcon has a black belly.

The type specimen was collected from Brazil by English naturalist William Swainson, and described by Nicholas Aylward Vigorsin 1825. [ Vigors noted the similarity to both hawks and falcons, but placed Gampsonyx within the «Accipitrine subfamily» because it lacks the notched beak of the falcons. He also noted its striking resemblance to the coloration of the falconets.

Later, the pearl kite was classified with the falcons. For example, Peters placed it with the forest falcons in subfamily Polyhieracinae. In the mid-20th century it was found to be related to Elanus based on morphology and its molt schedule.

This tiny kite breeds from Panama, Colombia and Venezuela south to Bolivia and northern Argentina, with an isolated sedentary population in Nicaragua. It is expanding its range and was proved to breed on Trinidad in 1970. It was first reported in Costa Rica in the mid-1990s, and now is fairly common along Pacific slope, to 1000m.

The pearl kite feeds mainly on lizards, especially Anolis, but also takes small birds and insects; it usually sits on a high open perch from which it swoops on its prey.

It is a very confident bird, it is displayed on cables and poles or bushes. The hunt is very similar to that of the hawk, sometimes hovering before striking the prey.