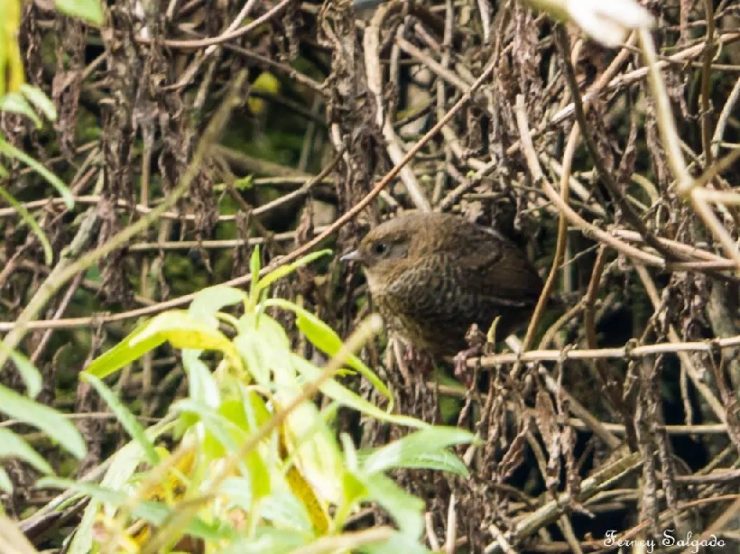 Formerly considered a race of S. canus. Its name Scytalopus comes from the Greek roots skutale or skutalon = stick, garrote and pous = foot. The epithet opacus comes from Latin and means dark.

It is 10·5 cm of lenght; male 13·9–17·9 g, female 13·4–16 g. Nominate male  differs from previously conspecific S. canus in having flanks and vent usually ochraceous tawny to cinnamon-brown or darker brown with obscure, relatively narrow, dense dusky bars, or sometimes only trace of brown and barely discernible bars; female occasionally like male, but usually paler and has brown upperparts, faint dusky barring on tips of inner remiges and on tail, more extensively brown flanks, pinkish-buff central lower belly; juvenile variable (even within single population), brown and barred above, cinnamon-buff to pinkish-buff below, throat and breast sometimes washed grey, underparts varying from fully barred to only flanks barred, or spotted from lower breast downwards; subadult much like female but browner, with more extensive pinkish buff on belly, flank bars sometimes crescent-shaped.

Two subspecies are recognized: S. o. opacus and S. o. androstictus. Only the nominal breed is found in Colombia.

It is found in the central Andes of Colombia south to northern Peru. In Colombia it has been registered in the Central mountain range in the department of Caldas in Nevado del Ruiz. Also in the municipality of Murillo (Tolima), in the town of La vereda and in the moor of Bordoncillo in Putumayo.

It is found at altitudes of 2,600 to 4,000 metres (8,500 to 13,100 ft) in the Andes of northern Peru, Ecuador and southern Colombia (Central mountain range) the transition zone between the high Andean forest and the páramo including areas of growth of Polylepis spp.

Females with an incubation patch and young individuals have been recorded in the months of March, May and November. Other details of their reproductive biology are unknown.

It remains in the understory where it forages on moss-covered logs and on the ground. It commonly goes unnoticed unless you sing.

Initially included in the species S. magellanicus and later considered as a race of S. canus from which it differs by its song, body size and plumage coloration.