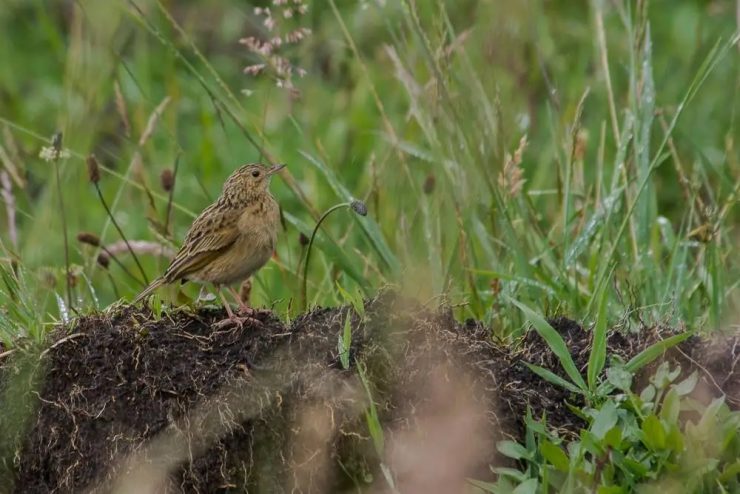 The paramo pipit (Anthus bogotensis) is a species of bird in the family Motacillidae. It is found in Argentina, Bolivia, Colombia, Ecuador, Peru, and Venezuela. Its natural habitats are subtropical or tropical high-altitude grassland and pastureland.

Paramo Pipits occur through the Andes from northwest Venezuela south to northwest Argentina, and inhabit open country at elevations above 2100 m, principally arid páramo and puna grasslands, where it favors areas of level ground. Although generally considered to be resident, the probability of seasonal movements to lower elevations in the non-breeding season exists. It is usually found alone or in pairs, but occasionally in small groups of six or more, foraging on the ground in search of insects and seeds. The species is easily overlooked, despite that is reasonably common in many parts of its range. Plumage-wise, it is a relatively typical member of its genus, although the relatively less densely streaked underparts should assist the identification process to some extent.

A. b. bogotensisA. b. shiptoniAvailable illustrations of subspecies in this group

It is found in the Andes of Argentina, Bolivia, Colombia, Ecuador, Peru, and Venezuela.

Apparently resident; some seasonal and elevation movements may occur.

Insects and seeds. Forages on the ground in low shrubs and grass, and in low páramo vegetation; runs through grass. Singly or in pairs, occasionally in small parties of six or more individuals.

Probably breeds in late Mar in N of range; eggs in Dec and young birds reported in May and Sept in Peru. In nuptial flight, male rises to moderate height and makes slow gliding descent. No further data.

Not globally threatened. Locally common to fairly common; uncommon to locally fairly common in Ecuador. Can be difficult to locate, and may be overlooked. Possibly occurs more widely in Colombian Andes and more continuously in S of range (Bolivia, Argentina).