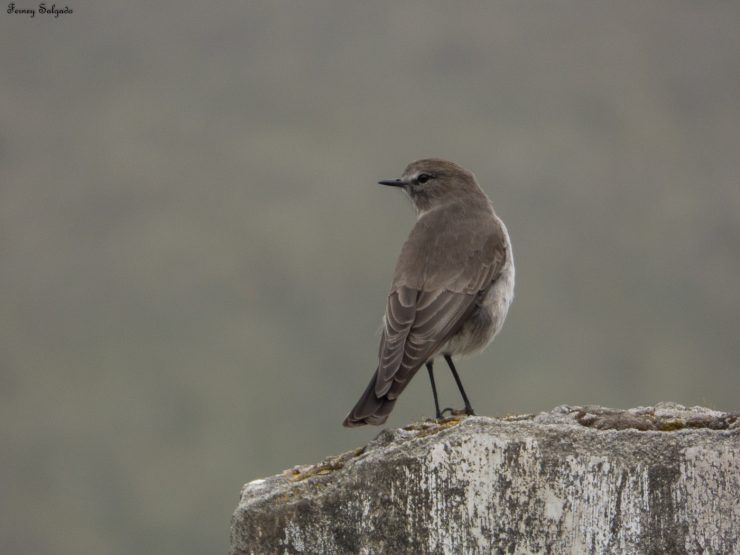 The size of the bird is 18 to 19 cm. It is similar to a blackbird (Turdidae), it has a short and thin black beak, the iris is dark brown and the legs are long and black. It has a long white superciliary line (1) that goes beyond the eye and a small white spot under the eye, the loreal area (2) is dark.

The plumage is grayish brown above, the crown (3) has a rufous tone (4), below it is grayish-white with the throat and belly whiter.

The wings are darker in color, the coverts (5) have some paler edges, the tail is blackish and the outer rectrices (6) have white edges. Both sexes are similar. Juvenile (7) has coverts and inner wing feathers with tan edges, with whitish streaked underparts, crown and back feathers have darker tips.

The type locality for this species is: «Quito, Ecuador». It was considered conspecific with Muscisaxicola griseus, but molecular DNA studies justify the specific separation of both taxa, with 2 full species.

This species is subdivided into 3 subspecies:

Spot-billed Ground Tyrant (Muscisaxicola maculirostris) but it is smaller in size, has a yellow base of the lower jaw, the crown is not rufous and is generally found at lower elevations.

It is found throughout the Andes from Colombia to Chile and Argentina; in Colombia it is probably found in Nariño, north of the Eastern Cordillera between Boyacá and Cundinamarca, in the Central Cordillera from Caldas-Tolima in Nevado del Ruiz to Cauca in PN Puracé. It is between 3,300 and 4,200 m high.

It feeds mainly on insects found on the ground; It forages by running or jumping on the ground, although it can also use low perches in trees, or perches high on walls.

Known reproductive seasons Reproduction has been reported in Colombia between September and December, in Ecuador between August and October.

Makes nest in holes with dry grass and roots or crevices in or under rocks Hole, lays 4 white eggs with tan spots

Its population density has not been quantified, but the species is listed as «common». There is no evidence of population decline or specific threats.

It is a silent species; produces weak and whiny «tik» notes