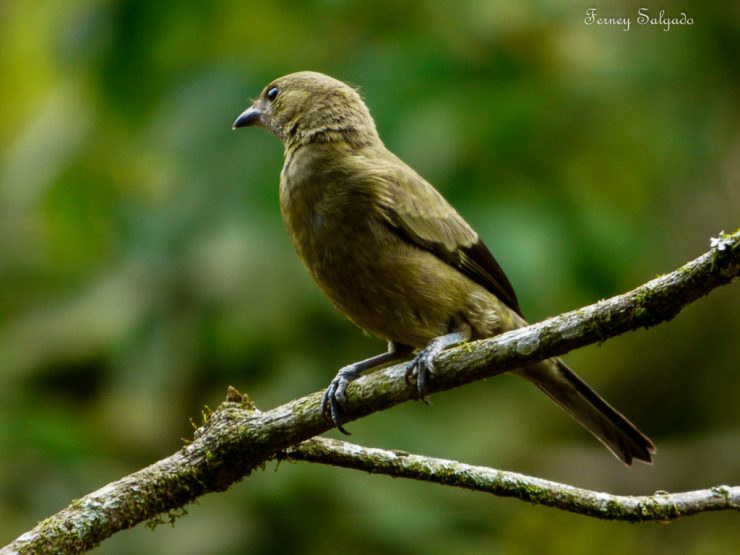 The size of the bird is 17 cm and weighs between 27 and 48 g. The plumage is grayish-olive in color, darker towards the back, the forehead, the underparts and the wing coverts (1) are yellowish and the distal half of the closed wing is black; the eyes are dark brown, the beak is black, and the legs are dark.

It is found from Nicaragua to the North of Bolivia, Paraguay, Brazil, Trinidad. It is up to 2,100 m high.

It feeds in almost equal proportions on fruits and flowers of plants like (Didymopanax, Miconia and Cecropia), insects like termites (Isoptera) and spiders; it is regularly hung upside down at the tips of palm fronds.

Known reproductive seasons Reproduction has been reported between January and June in Panama, between July and September and December in Colombia, in January in Guyana, between December and September in Suriname, in July in French Guiana, throughout the year in Trinidad, between October and December in Brazil. The chicks remain in the nest between 17 and 21 days and are fed by both parents

It is an active and noisy bird that is almost always seen in pairs or small groups. Usually hangs from large leaves while scrutinizing their underside. It can be somewhat territorial and is often seen feeding from artificial feeders.

Least Concern LC. Its population density has not been quantified, but the species is listed as «common» (Stotz et al. 1996).

Based on an Amazonian deforestation model (Soares-Filho et al. 2006, Bird et al. 2011), it is thought that the population over three generations (approximately 12 years) loses between 15.8% and 17, 6% of suitable habitat within its range; the population is then expected to decrease by 25% over this period of time.