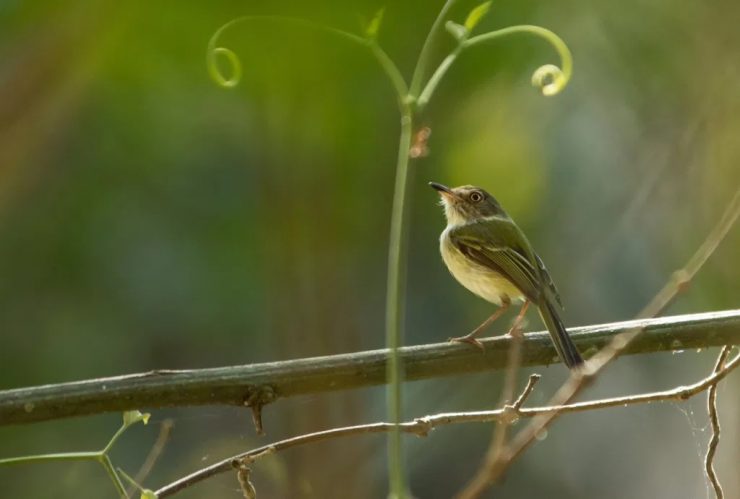 Small in size, it measures 9.5 cm. The iris is pale yellow. above it is olive with whitish loruns; the wings darker, with two fine yellowish stripes. Underneath it is whitish, with a distinguished brownish streaking on the chest and throat.

It is distributed in Panama, Colombia, Venezuela, Guyana and Brazil. See more details in Subspecies.

It inhabits the understory of deciduous forests and dry tropical and subtropical scrubs, mainly below 800 m of altitude.

The species A. pilaris was first described by the German naturalist Jean Cabanis in 1847 under the scientific name Colapterus pilaris; type locality «Cartagena, Bolívar, Colombia».

The genus Atalotriccus was described by the American ornithologist Robert Ridgway in 1905.

The masculine generic name «Atalotriccus» derives from the Greek «atalos»: delicate, tender, and «trikkos»: small unidentified bird, in ornithology, «triccus» means «tyrant flytrap»; 8 and the name of the species «pilaris» , comes from the Latin «pilaris»: without hair, without crystal.

It is a very close relative of the genus Lophotriccus, where some authors place it, such as Ridgely & Tudor (2009), despite the lack of the crown pattern peculiar to the species of that genus. The subspecies venezuelensis differs marginally from the nominal one and would perhaps be better if joined to it.

The extensive genetic-molecular studies carried out by Tello et al. (2009) discovered a number of novel relationships within the Tyrannidae family that are not yet reflected in most classifications. Following these studies, Ohlson et al. (2013) proposed dividing Tyrannidae into five families. According to the proposed order, Atalotriccus belongs to the family Rhynchocyclidae Berlepsch, 1907, in a new subfamily Todirostrinae Tello, Moyle, Marchese & Cracraft, 2009 together with Taeniotriccus, Cnipodectes, Todirostrum, Poecilotriccus, Hemitriccus, Myiornis, Oncost Lophotriccus. The Brazilian Committee of Ornithological Records (CBRO) adopts this family, while the South American Classification Committee (SACC) awaits proposals to analyze the changes.

According to the classification of the International Ornithological Congress (IOC) and Clements Checklist v.2017, four subspecies are recognized, with their corresponding

Atalotriccus pilaris venezuelensis Ridgway, 1906 – northern Venezuela from Carabobo east to Sucre, and in the plains from west Apure east to Monagas.

It feeds on a large number of invertebrates, especially small coleopterans. Supplement their diet with small berries and some seeds.

Forages singly or in pairs and sometimes with mixed flocks in the lower part of dense vegetation. Searches or performs short flights of foliage, usually at eye level. It remains inconspicuous.

It considered as a Least Concern.

The quality of its high and strident call is reminiscent of that of the Andean cimerillo (Lophotriccus pileatus); typical phrases include a «kip-kip-trrr» or «kip-kip-trrrriiíp.»