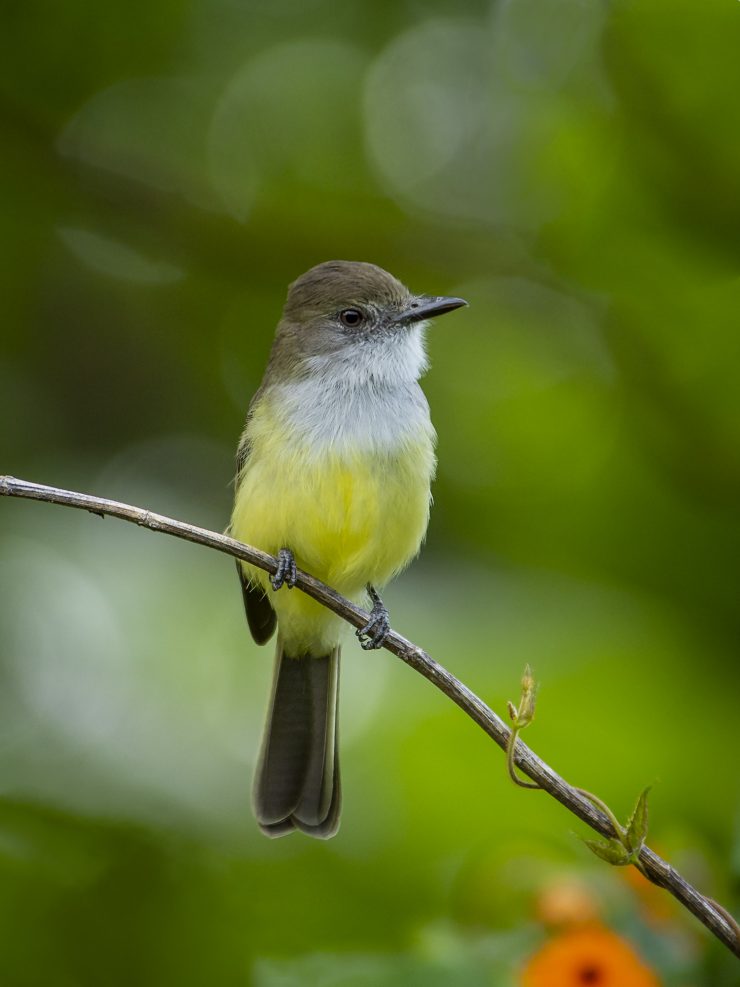 Mountain flycatcher, found in all three Colombian mountain ranges where it can be rare to locally common. His name Myiarchus means ruler of the flies, derived from the Greek roots myia = fly and arkhós = ruler. The epithet cephalotes refers to his head, from the Greek kephalé = head and otés = related to.

It measures about 20cm. It has a black bill, is brownish olive above with a slightly brwner head. It has the margins of the secondary feathers and two broad wing bars of a grayish or buffy white hue. The outer margin of the outermost rectrices is buff white (white does not extend all the way). Underneath it is very similar to other species of the genus.

It can be confused with the Apical Flycatcher (Myiarchus apicalis) but the latter has a white tip of the tail, its head and throat are darker, its wing bars are less defined and it is found mainly in the driest valleys. It is distinguished from the other Myiarchus by its white margin on the tail and its more prominent wing bars.

Their taxonomic affinities are not yet resolved. The present species is possibly a sister to Myiarchus ferox and M. phaeocephalus, it could also be a sister to M. apicalis.

Two subspecies M. c. caribbaeus and M. a. cephalotes. In Colombia we find the nominal subspecies.

It is found in the mountains of northern Venezuela and south through the Andes to Peru and northern Bolivia. In Colombia it is found from 1500 to 2400m above sea level (rarely up to 2700 meters), in the three mountain ranges from the North of Santander and Antioquia to the south through Nariño. Few records exist for the western slope of the Western Cordillera and for the Eastern Cordillera.

It inhabits the edges of humid forest where it is uncommon, also in forest clearings with scattered bushes and trees. It is easily found in the Cueva de los Guácharos National Park.

It feeds on insects which it traps in foliage or in flight from an exposed perch.

Individuals in reproductive condition have been recorded from February to June in the Central mountain range and in the Western mountain range. Also nests, between March and April in the Cueva de los Guácharos National Park. Build a messy-looking, cup-shaped nest under an eaves.

Very similar to others of the genre. Perches low solitary, often exposed in foliage.

Their taxonomic affinities are not yet resolved. The present species is possibly a sister to Myiarchus ferox and M. phaeocephalus, it could also be a sister to M. apicalis.