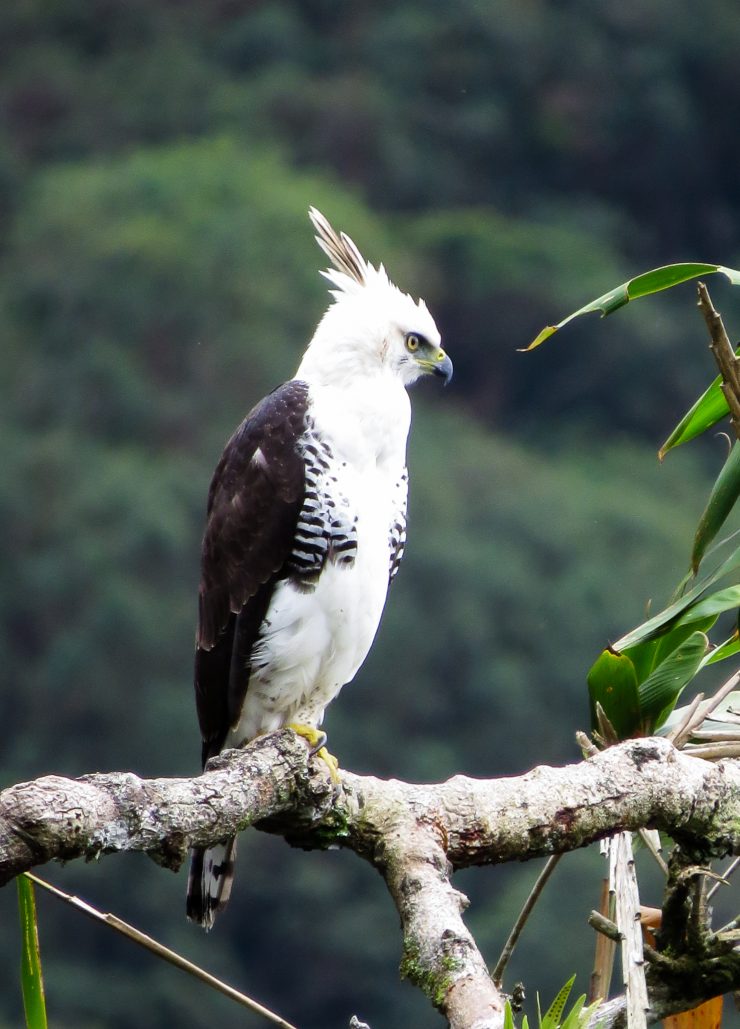 The Ornate Hawk-Eagle is a fairly large bird of prey from the tropical Americas. Like all eagles, it is in the family Accipitridae and order Accipitriformes.

Is one of the most spectacular predators in the humid forests of the Neotropics. It is characterized by its black occipital crest ending in point, which stands when excited. It feeds mainly on birds, ranging from the size of a pigeon to that of a cracid.

It measures between 60 and 70 cm long and weighs about 1.2 kg. It is large, has wide, round wings and long tail. Above it is brownish black and the primaries are light grey underneath, crossed by 4 black stripes.

The crown and pointed crest are black. The rest of the head, the sides of the neck and chest are reddish, separated from the white of the throat and the chest by a line or black «moustachial». The rest of the lower region, lower wing covers and legs are white with a marked black bar. The legs are completely feathered and the fingers are yellow. The iris is toaste orange or yellow.

Up to 1200m. This bird is found in the south of the Pacific Coast up to the high Anchicayá, in the north of the Andes up to the lower Valle del Cauca, in the middle valley of the Magdalena, in the Atlantic east to Santa Marta and west of the Guajira and in the east of the Andes, Serrania de la Macarena, Western Caquetá, Orinoco River, Vichada, Vaupés and Amazonas. It is also found in eastern Mexico, western Ecuador, northern Argentina and southern Brazil.

They live in humid forests of well-preserved lowlands, also frequent clearings within the forest and are occasionally seen at the base of the mountains.

The Ornate Hawk-Eagle is a powerful predator that readily varies its prey selection among two main prey groups. Largely the most significant prey for the species are medium to large sized birds. The other main prey type is a variety of small to medium-sized mammals. On occasion, reptiles may form a seldom part of the diet.