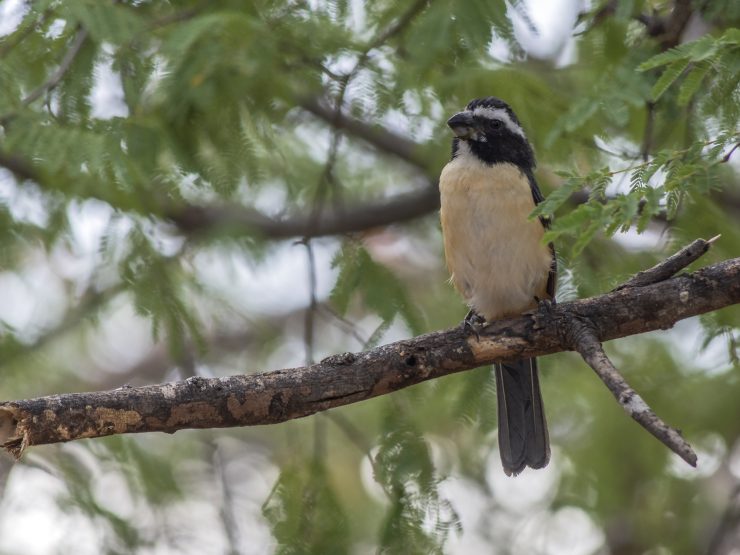 This species is found in the lowlands in the north of the country and east of the Andes. It is a fairly silent bird and is difficult to confuse with other jumpers. Its name Saltator derives from Latin and means dancer while its epithet Orenocensis refers to the Orinoco River.

It measures from 18.5 to 19 cm and weighs on average 33.7 g. Both sexes similar. It has brown irises, blackish legs, a black upper jaw, and a blackish lower jaw with a pale base. It has the loreal region, the face, ear coverts and the malar region of black color; a white superciliary line that extends behind the earbuds; Crown and upperparts gray with blackish wing coverts. Their rectrices are black and the primary feathers are brownish with pale edges on the outer margins. It has the chin, the center of the throat and a small white spot at the base of the bill. The rest of the underparts are tan buff, especially on the sides.

Unmistakable. Easily recognizable thanks to a combination of black head sides, white eyebrow and suede underparts.

Two subspecies S. o. rufescens and S. o. orenocensis, both are found in Colombia and differ mainly because rufescens is larger and has a more robust bill.

It has been recorded feeding on flowers and fruits of Annona jahni (Annonaceae) and Momordica charantia (Cucurbitaceae). Also from seeds and leaves of unknown species. To a lesser extent, it includes insects in its diet.

Nests have been registered in Venezuela in the months of May and June. This is cup-shaped which is built with low-lying grasses (2 – 5 m) on a bush or reed. The size of its position is two blue-green eggs with black lines and spots on the larger end. No other aspects of their reproductive biology are known.

Stays in pairs or small groups and is much quieter than other Saltators. Forages high in vegetation and occasionally a little lower. Very rarely seen with mixed flocks.

The taxonomic affinities of the genus Saltator are uncertain and recent molecular studies indicate that it could belong to the family Thraupidae.