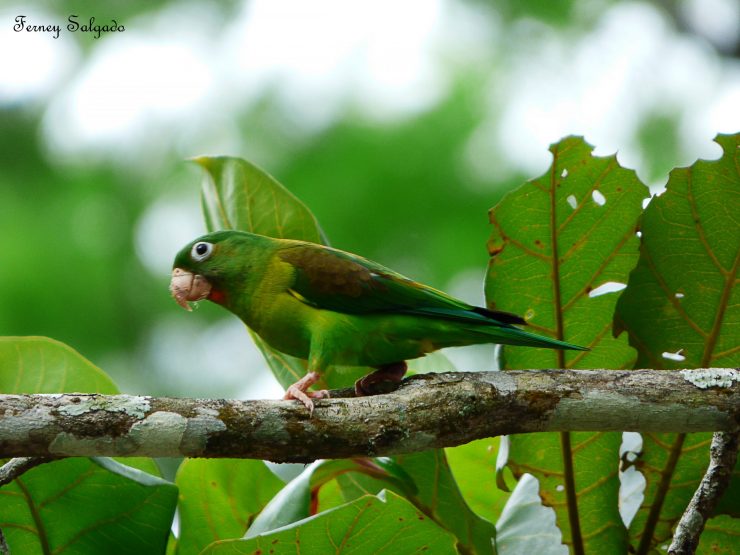 The orange-chinned parakeet (Brotogeris jugularis), also known as the Tovi parakeet, is a small mainly green parrot of the Brotogeris genus. It is found in Colombia, Costa Rica, El Salvador, Guatemala, Honduras, Mexico, Nicaragua, Panama, and Venezuela. Its natural habitats are subtropical or tropical dry forests, subtropical or tropical moist lowland forests, and heavily degraded former forest. Its name comes from a small clump of bright orange feathers located under the lower beak. Like other parrots, it is capable of imitating simple human speech

The individuals of this species measure approximately 18 cm and weigh between 53-65 g. It has a short and sharp tail, a dull yellowish bill and a bright green head with washed blue on the crown. The rest of the body is mainly green with a small orange spot on the chin and a bronze patch on the shoulder. Their inner wing coverts are yellow and their remiges are bluish green.

East of the Andes it is often confused with the Cobalt-winged Parakeet (Brotogeris cyanoptera) but it does not have a bronze patch on the shoulder and its primaries and inner wing coverts are cobalt blue.

Two subspecies are recognized B. j. jugularis and B. j. exsul, the first one is towards the north of the country and exsul towards the west.

It is found in southwestern Mexico and throughout Central America, primarily along the Pacific Coast to Colombia and Venezuela. In Colombia it reaches up to 1000 meters above sea level on the Pacific Coast up to Buenaventura. It is also found in the northern lowlands of the Andes to Santa Marta, the western base of the Serranía del Perijá and south to the Nechí River and the upper Magdalena Valley. To the east of the Andes it is located in Norte de Santander and the southwest of Arauca.

Throughout its range it inhabits open areas with scattered trees, deciduous and semi-deciduous forests, secondary forests, gallery forests and crops. It is common in dry forest and cultivated or partially deforested areas with remaining trees.

It feeds on fruits and seeds such as those of Ficus ovalis, Ceiba sp. Bombax sp., Byrsonima sp., Cecropia sp. and Muntingia sp. They also incorporate guaba, balsa and Erythrina sp. Flowers and nectar into their diet. It can cause damage to fruit crops.

Reporductive events have been recorded between January and April. Nests in cavities made by abandoned carpenters, stumps in palms, and cavities in termite mounds. Sometimes they nest communally. It lays 4 to 8 eggs and incubation in captivity takes about 3 weeks.

Outside the breeding season it is found in small noisy flocks. Flies irregularly with frequent changes of direction and alternates humming wingbeats with short glides. They generally forage high in the treetops. Occasionally they are destructive in cultivated fruit trees.

Its state of conservation is of minor concern. However, it faces strong pressure due to its illegal trafficking.

They are well known for having great abilities to imitate the human voice.