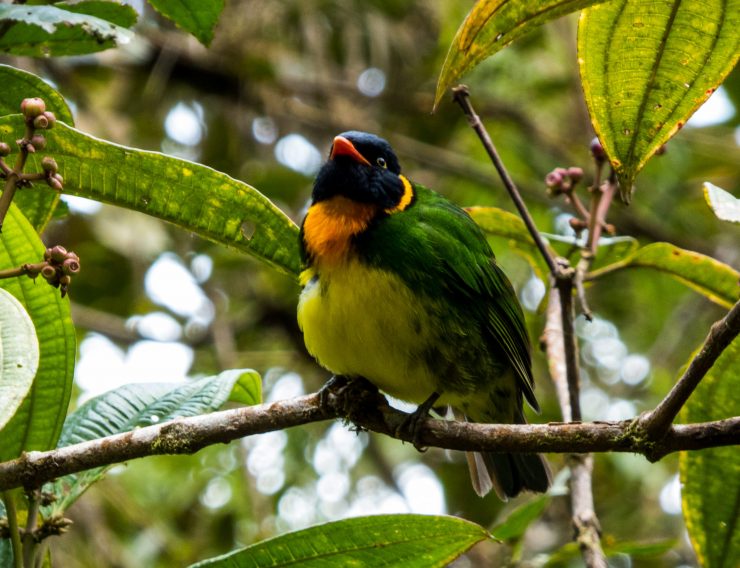 The orange-breasted fruiteater (Pipreola jucunda) is a species of bird in the family Cotingidae native to Colombia and Ecuador. Its natural habitat is subtropical or tropical moist montane forests. It is a plump green bird about 18 centimetres (7 in) long. Males have a glossy black head and bib, an orange throat and yellow belly. Females lack the dark head and have green upper parts and green and yellow streaked underparts. Both sexes have orange beaks and greyish-green legs. This is a relatively common species with a wide range, and the International Union for the Conservation of Nature has rated its conservation status as being of «least concern».

The male orange-breasted fruiteater has a glossy black head and throat and green upper parts. The breast is bright orange and the belly yellow with green mottling at the side. The female is similar in appearance to the female masked fruiteater with green upper parts and green and yellow streaked underparts. Both sexes have yellow eyes, orange bill and greyish-green legs. This bird grows to a length of about 18 centimetres (7 in). The song is similar to that of the black-chested fruiteater, a high-pitched ascending «pseeeeeweet».

Similar to other pipreolas but the male is distinguished by an orange patch on the high breast. The female is more easily confused with the female Black-Green Fruit Bowl (Pipreola riefferii), but is smaller and has green, not orange, legs.

This species is native to the foothills and slopes of the western side of the Andes in South America. Its range extends from southwestern Colombia to southwestern Ecuador, mainly between the altitudes of 600 and 1,900 metres (2,000 and 6,200 ft) above sea level. This fruiteater is usually found in the understorey of dense, wet, mossy forests.

The orange-breasted fruiteater is sometimes seen in small flocks with other species. It feeds largely on fruit which it either eats while perching on a branch or while hovering rather clumsily. Cup-shaped nests have been found about 5 metres (16 ft) above the ground but little is known of this bird’s breeding habits.

This bird makes altitude migrations in response to temporary variations in the availability of fruits. It is a silent bird, usually solitary or in pairs and sometimes joining mixed flocks. It is common to observe this bird capturing fruits by suspended flight or from the perch.

It has been considered by some authors as a subspecies of P.aureopectus. P. jucunda together with P. lubomirskii, P. aureopectus and p. pulchra were considered a single species based on eye, beak and leg coloration.Status

The International Union for Conservation of Nature rates the orange-breasted fruiteater as being of «least concern», on the grounds that the bird has a reasonably-large range and is fairly common within that range, and its population seems to be steady.