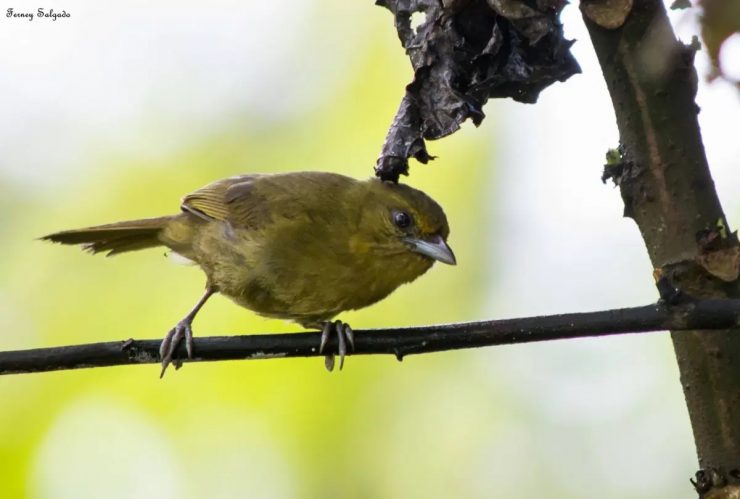 The oleaginous hemispingus (Hemispingus frontalis) is a species of bird in the family Thraupidae. It is found in Colombia, Ecuador, Peru, and Venezuela. Its natural habitats are subtropical or tropical moist montane forests and heavily degraded former forest.

The species’ underparts are dull-yellow in colour while it upperpart is olive-green.

The Oleaginous Hemispingus is a rather dull-colored member of its genus, predominantly dull yellow below and olive-green above, with a poorly marked yellowish supercilium, although this is more obvious in the Venezuelan races, especially those farthest from the main Andean chain. In a sense, it is well named; oleaginous—having the property or appearance of oil—is derived from olive, and this species is most certainly largely olive-colored. It is most liable to be confused with one of the smaller and finer-billed Basileuterus warblers, or the Superciliaried Hemispingus (Hemispingus superciliaris), which, as its name suggests, has a much more obvious supercilium. Its habits and behavior are typical of the genus as a whole.

It is distributed by the coastal mountains of Venezuela, in the Serranía del Perijá and along the Andes, from the west of Venezuela, through Colombia, east of Ecuador, to the southeast of Peru (Cuzco). [5]

This species is considered uncommon in its natural habitat: the lower stratum of humid montane forests at altitude, mainly between 1500 and 2500 m. [6]

The species S. frontalis was first described by the Swiss ornithologist Johann Jakob von Tschudi in 1844 under the scientific name Hylophylus frontalis; the type locality is: «eastern slope of the Andes, Peru». [5]

The feminine generic name «Sphenopsis» is made up of the Greek words «sphēn»: wedge, and «opsis»: appearance; and the name of the species «frontalis» comes from modern Latin: from the front, from the eyebrows; in reference to the superciliary list characteristic of the species. [7]

The present species together with Sphenopsis melanotis (including S. ochracea and S. piurae), were traditionally included in the genus Hemispingus, until in 2010, publications of complete phylogenies of large sets of species of the Thraupidae family based on genetic sampling , [8] [9] made it possible to verify that they formed a separate clade from the genus they comprised, for which the resurrection of the genus Sphenopsis, until then considered a synonym of Hemispingus, was suggested. [3] The recognition of the resurrected genus and the inclusion of the two species was approved in Proposal No. 730.10 to the South American Classification Committee (SACC). [10]

According to the classifications of the International Ornithological Congress (IOC) [11] and Clements Checklist / eBird v.2019 [12], five subspecies are recognized, with their corresponding geographic distribution: [5]