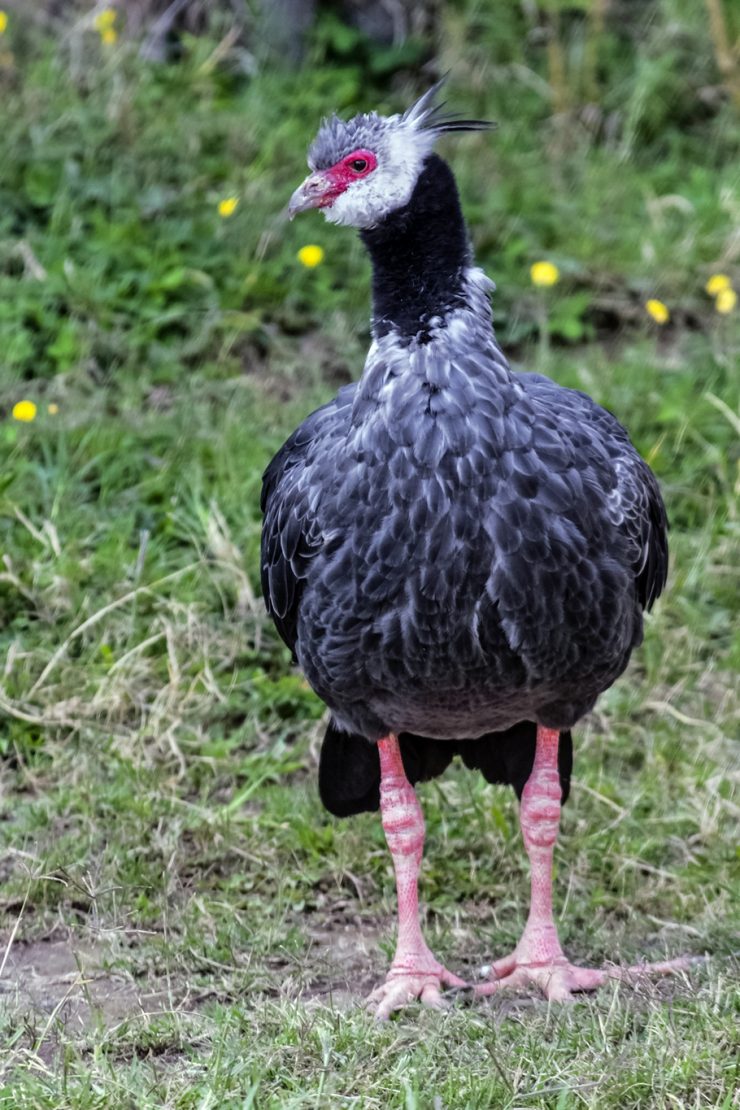 Its name comes from the Greek Khaunos which means spongy or porous and refers to the air sacs present under the skin, chavaria probably derives from the French charivari which means murmur of noise.

Large bird 79-91 cm in length. It does not present sexual dimorphism. It is distinguished by the presence of a red coloration around the eye, it has black feathers that stand out at the crown, the legs are reddish-pink, the sides of the head and throat are white, the neck is of black color and the body in general has a dark gray color with some greenish parts.

It can be confused with the Horned Screamer (Anhima cornuta), but its red coloration around the eyes and the white parts on its face easily distinguish it.

It is found in a reduced range of distribution in South America, being observed only in Colombia and Venezuela. In Colombia it is located in lowlands up to 200 meters above sea level in the Caribbean region in the Sierra Nevada de Santa Marta and the middle Magdalena Valley. It is considered a common species in the lower valleys of the Magdalena, Atrato and Sinú rivers.

It is found in lowlands in swamps, lagoons with great vegetation in its surroundings, madreviejas and open or wooded areas. It also inhabits areas with variable salinity such as the wetlands of the Ciénaga Grande de Santa Marta.

It is considered a specialist bird and feeds mainly on semi-aquatic vegetation such as Cienaga Cloves (Ludwigia leptocarpa) and watercress (Ludwigia helminthorrhiza).

They make the nest on top of the aquatic vegetation, forming mounds. The female lays 2-7 white or yellow eggs and the incubation period lasts 42-44 days. The elaboration of the nest and incubation of the eggs is carried out by both parents.

They are found alone, in pairs or small groups. They are calm, but when in heat they can become aggressive. Its song is very loud, similar to the sound of a trumpet, which allows its easy location.

At the global level it is classified as a near threatened species, but at the local level it is classified as a vulnerable species, due to the increasing destruction of its habitat due to the drainage of wetlands for agricultural or livestock use, the destruction of mangroves, and indiscriminate hunting. and illegal trafficking for commercialization as pets. The estimated population in Colombia is less than 10,000 individuals and it is believed that the most viable population is found in the country, corresponding to about 70% of the global population. It is considered an almost endemic species of Colombia and therefore everything concerning its conservation is of great concern. Among the conservation measures currently taken is their preservation in protected sites such as the Los Katios PNN and the SFF of the Ciénaga Grande de Santa Marta, as for the proposed measures there are projects for the protection and improvement of the conditions of the wetlands and ratification of the Ramsar convention (1997). More research is required regarding ecology and reproduction.