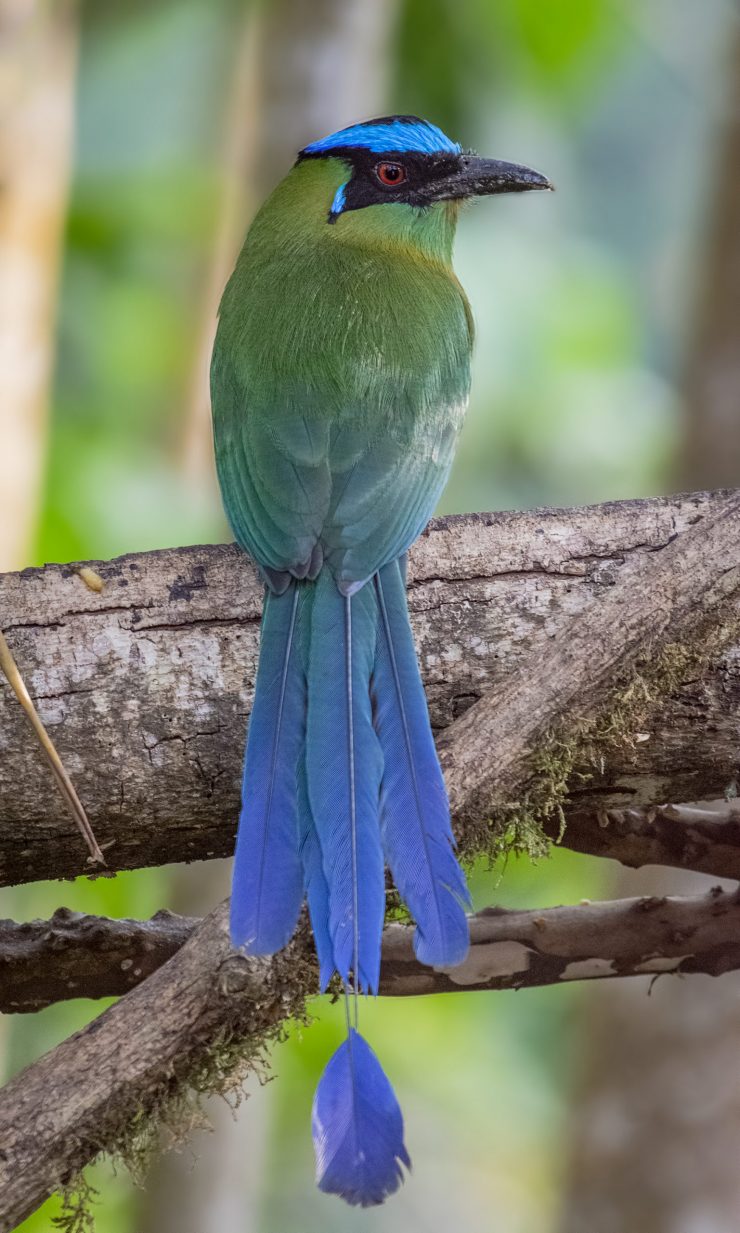 Bird from the highlands of the Andes, silent and inconspicuous despite its large size. Momotus comes from the specific name Ramphastos momota and the epithet Aequatorialis is a term from the Latin language that means equatorial.

It measures 48 cm and weighs between 123 and 176 g. It has red eyes and gray legs. It has a black crown surrounded by a turquoise blue ring with a little violet in the peripheral part. It has a black mask with well-marked turquoise blue edges in all its parts; grass green upperparts, olive green underparts with faded brown and two black dots on the breast. Its tail is long, racket-shaped at the tips and almost completely blue, with a faintly curved beak and serrated at its edges.

Very similar to the Amazonian Momota (Momotus momota), but this is found in the lowlands east of the Andes and is slightly smaller, olive green on top and tinged with olive on the throat and chest. It can also be confused with M. subrufescens, which is smaller, more rufous on the belly, with a wider diadem on the front and is only found in the Magdalena valley and the Caribbean coast.

Two subspecies M. a. aequatorialis and M. a. chlorolaemus, the first for the Andes of Colombia and Ecuador and the second for the Peruvian and possibly also Bolivian Andes.

It inhabits humid mountain forests and a great variety of habitats such as crops, open areas with scattered trees, gardens, edges and forest clearings.

Individuals in reproductive condition have been recorded in March and September. It nests in burrows that it digs in ravines.

Generally, it remains solitary or in pairs in the middle or low level of the vegetation. It perches silently and in moments of alarm it stands still and moves its tail like a pendulum. It captures its prey on the fly and sometimes on the ground as well.

Closely related to M. momota and sometimes treated as a subspecies of the latter. However, marked differences in size, plumage, vocalization and ecology justify their separation as a separate species.

It is considered a species of minor concern.