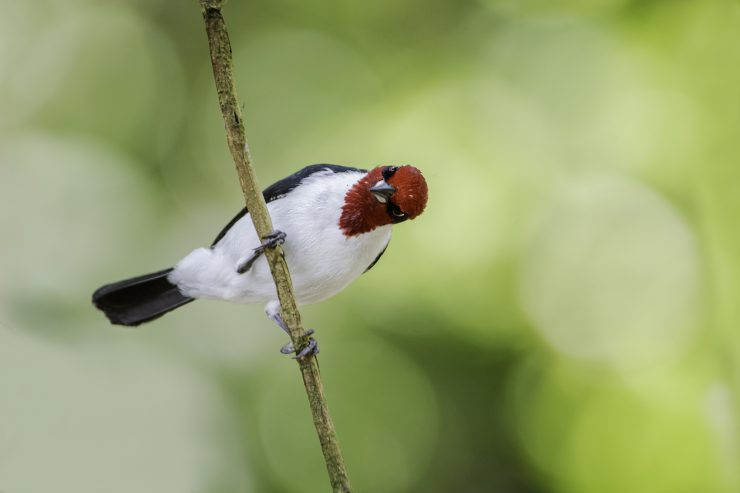 This species was until recently considered a subspecies of Paroaria gularis, but molecular and morphological evidence support their separation as distinct species. Its name Paroaria derives from the term Tupí Guaraní Tiéguacú paroára, which was used to refer to a small bird of yellow, red and gray colors. Its epithet nigrogenis means black-cheeked and derives from the Latin roots niger = black and genis = cheeks.

It measures around 16.5 and weighs about 23g. Both sexes are similar. It has a stylized, flat crown and a short, rounded occipital crest. Its forehead and crown are red, it has a small black spot on the chin, lore and black ear coverts forming a red mask, malar region and throat which extends to the upper part of the chest forming a bib. Above it is black, including occiput, wing coverts and tail. The sides of the chest are white and extend up to the top of the neck and nape. The rest of the underparts are also white including flanks and undertail coverts. The iris of their eyes is intense orange, blackish legs, blackish upper jaw and horn-colored lower jaw. The young are similar to the adults but with the pale orange head washed brownish.

Very similar to the Red-capped Cardinal (Paroaria gularis) but it differs from the latter because it has a black mask, it is much larger, it has a black spot on its chin and it has a red, not black, bib.

Use gallery forest edge near bodies of water and humid savannas. In general use open areas.

It uses a wide variety of food resources such as fruits, insects, seeds, although it is not specifically known which groups of insects or plants it feeds on.

Apparently its breeding season in Venezuela covers the months between June and November. Build a cup-shaped nest with thin twigs and bark which is lined with finer materials and spider webs. It locates it in the branching of a branch about 3 m high above a body of water. The size of its lay is 2 pale cream colored eggs with olive brown spots concentrated mainly on the larger end. Their nests are frequently parasitized by Molothrus bonariensis.

They generally remain in pairs and are sometimes seen in flocks congregated in abundant sources of resources. Forages on the ground or in bushes where they inspect bare branches.

Previously it was considered a subspecies of Paroaria gularis but thanks to molecular and morphological studies it was possible to establish its divergence. This species could form a superspecies with P. gularis, P. baeri and P. capitata, all formerly located in the genus Coccopsis.