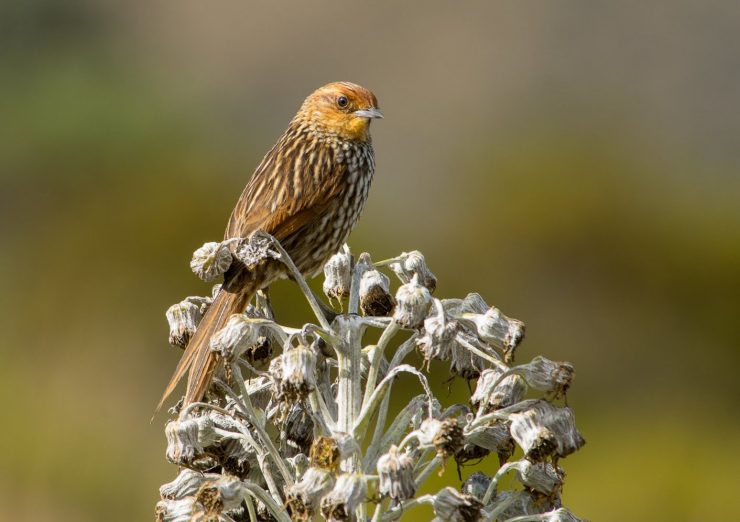 It is a little-known species that is found in high mountain areas in an area that extends from northern Colombia to southern Peru. Its name Asthenes comes from the Greek and means weak or insignificant. The epithet flammulata derives from the Latin flammula = small flames, referring to their striae.

It measures 16-17 cm and weighs 17-27 g. Both sexes similar. They have dark brown irises, brown to grayish-green legs, and dark bill with pale lower jaw base. Its forehead is brown to rufescent with dark brown streaks, which become wider and more rufescent at the crown. It has a back to dark brown undertail-coverts with buff streaks, dark brown wing-coverts with rufous margins, reddish remiges with dark tips, blackish central rectrices and opaque rufous external ones, somewhat frayed at the end, producing a spiny appearance in the distal portion. . It has an orange buff chin and high throat, which becomes more opaque in the lower throat. Its chest and flanks are whitish with dark brown streaks, which become paler and less distinctive on the white belly. Their under-caudal coverts and lower flanks are rufescent with undistinguished pale striatum.

It could be confused with the female of Phrigylus unicolor also striated above and below, but with a conical bill. The Striped Canastero (Asthenes wyatti) presents poor striation in lower parts.

Four subspecies are recognized: A. f. multostriata, A. f. quindiana, A. f. flammulata and A. f. taczanowskii. The multostriata breed is endemic to Colombia and is found from Norte de Santander to Cundinamarca. It differs from the nominal breed by a darker forehead, a more ocherish superciliary, a dark rufous chin and throat, and belly striations with broader and blackish margins. The Quindian subspecies is also endemic and is found from Caldas to Cauca. This one has a white chin, a paler throat than the previous breed, and narrower ventral striae. The nominal breed is found in the department of Nariño.

It is found in the Andes from Colombia to Peru. In Colombia it is distributed from 2800 to 4200 m above sea level in the Eastern Cordillera from the south of the department of Norte de Santander south to Cundinamarca. In the Central mountain range from south of Caldas to Nariño.

It lives on the edge of the arboreal vegetation and in the moor, on rocky slopes covered with grasses and shrubs.

Their diet is mainly made up of arthropods. The details of this aspect of its natural history are unknown.

In Colombia, individuals in reproductive condition have been registered in February and September. There is no further information about it.

Stay alone or in pairs. It usually captures prey by gleaning on the ground and in low vegetation.

According to phylogenetic data, this species forms a monophyletic group with A. virgata and A. maculicauda, ​​previously considered conspecific by some authors.