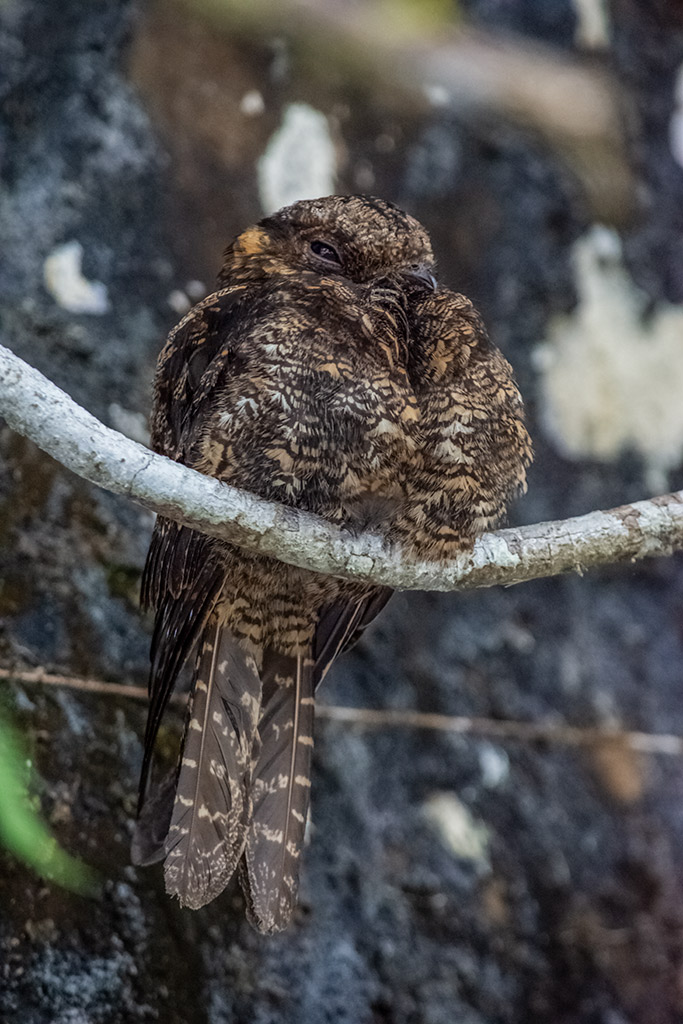 The lyre-tailed nightjar (Uropsalis lyra) is a species of nightjar in the family Caprimulgidae.The male of this species is unmistakable due to its long tail, almost three times the length of its body. It is found in the Andes from 800 to 2500 meters above sea level. Its name Uropsalis means scissor tail and derives from the roots oura = tail and psalis = scissors. Its epithet lyra derives from the Latin lyre = lira.

It measures 25 to 28 cm and the male has a tail that reaches 63 to 80 cm. It has brown irises, blackish bill and brownish legs. Females weigh 74 to 79 g and males around 68 g. It has brown upper parts with grayish-white, buff, fawn and cinnamon spots with broad buff-buff nuchal collar. Its underparts are brown with spots and fawn barred, buff and cinnamon which becomes brown barred on the flanks and lower part of the belly. It also has a suede band on the lower part of the throat. The male has a long tail with the outermost feathers with white tips. The female has a much shorter tail without white markings and a rufous-spotted black crown. Both sexes lack white spots on the wings.

The male of the Earwig Roadguard (Uropsalis segmentata) also has a long tail, although much shorter than that of the present species and without white tips. The female is very similar to the female of U. segmentata but the latter has a mottled and vermiculated crown of black and greyish, not black and rufous. In addition, above and below it also presents more suede speckles.

Three subspecies U. l are recognized. lyra, U. l. peruana and U. l. Argentina, which vary in size and coloration. The Peruvian one is much more reddish in color and Argentina has white markings on the chest. Only the nominal subspecies is found in Colombia.

It inhabits rain forests and humid cloud forests where it uses open areas, clearings, and forest edges, generally near steep slopes, rocky ravines, and cave entrances. Sometimes it can also be found in open areas near bodies of water.

It probably feeds mainly on insects.

Courtship songs have been recorded in the months of July, August and December. Also males in reproductive condition in the month of June. Males form leks during this time. Other aspects of their reproductive biology are unknown.

It is a night owl. Forages by short flights from the ground or from low perches to high perches, usually along clearings and forest edges. During the reproductive period, males make behavioral displays of courtship in communal leks, where they attract females. They also become territorial and aggressive towards other males, which they displace with fluttering and scissor movements with their tail.