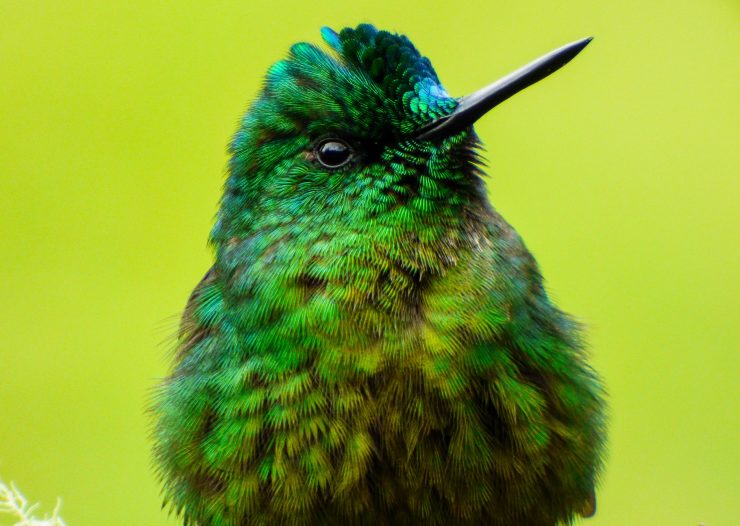 The long-tailed sylph(Aglaiocercus kingii) is a species of hummingbird in the family Trochilidae and the order Apodiformes, Its measures around 18 centimeters.

It’s a short bill, black, straight, pointy hummingbird, the male, is bright green on the back with the lower parts more obscure, the green iridescent crown and presents green tail with feathers of gradated length, being the external ones markedly long up to 14cm. The female measures 9.7 cm, has a bright green back, a white throat and chest with green spots and a cinnamon-colored abdomen. Unlike the male, the female’s tail is short, forked and dark blue green with white tips.

This species is found in the northwest of Venezuela and in the Andes of Colombia, Ecuador, Peru and Bolivia. In Colombia it is distributed from 1400 to 3000 m above sea level in the Serranía de Perijá, in the Eastern Cordillera, in the Central Cordillera from the south to its western slope in the department of Cauca, in the western mountain range from the south to the department of Valle del Cauca. It has also been registered on the eastern slope of the Western Cordillera in the southwest of Antioquia near the municipalities of Jardín and Caicedo and in the Central Cordillera from the municipalities of Yarumal and Amalfí in Antioquia to Ibague in Tolima.

Its natural habitat is subtropical or tropical moist montane forest.

The long-tailed sylph feeds on nectar (as of many other hummingbirds), insects, and, at times, small spiders. Flowers with higher sugar content are often preferred. They can be seen at hummingbird feeders, as well. A long-tailed sylph can lick nectar up to 13 times per second!

The male hangs on the flowers and uses his tail to balance while sipping nectar. The females that visit ericaceous hang from the bouquet with the inverted body to be able to introduce the bill into the pendulous flowers.